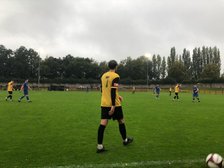 AWAY POINT FOR THE OWLS!

For the third time in a week, the Owls could not convert a 1-0 interval lead into all the points. A good road performance did not get the full reward, with Curtis Burrows equalising a Scott Vernon header to give Loughborough Dynamo a 1-1 draw.

With injuries & suspensions to contend with, Dave Smith opted to give new signing Brandon Buckley the number 10 role in a 4-2-3-1 formation.

It was very wet in Leicestershire at kick-off and the steady rain got heavier as the afternoon progressed. The pitch though, although saturated and bringing up the occasional splash of water, played reasonably well.

As at Glossop & Lincoln, the Owls started by far the best and, after Hannah had missed a chance following excellent interplay between Buckley & Bateson, the visitors deservedly moved ahead in the 17th minute.

The goal was simplicity itself but superbly well executed. Venney floated in a perfect free-kick from the right and Scott Vernon, demonstrating both his experience & prowess in the air, darted between two defenders to power in the header from 6-yards.

Clee were playing at a noticeably high tempo and this pressing produced a golden chance just beyond the half-hour mark. A flowing fast-paced move opened up Dynamo and Hannah shot wide at the far post with the net at his mercy. In fairness, the conditions were sometimes making it difficult to assess the run of the ball.

Just before half-time, Jacklin was forced off with a suspected ankle injury. This was the only blot on a fluent 45 from the Owls.

1-0 had proved to be a dangerous score in the last couple of outings but confidence was high amongst the faithful that it would be third time lucky!

Loughborough improved markedly after the break however and the clash became much more even. The second goal was going to be crucial and, unfortunately from a Clee perspective, Loughborough drew level in the 61st minute. A clever bit of skill from Riley allowed Curtis Burrows to find the roof of the net, via a deflection off a sliding defender.

This setback galvanised the Owls into straining for the winner and there were three opportunities before the whistle sounded.

Firstly, Riley bravely blocked a fierce drive by Hannah and then, in the 80th minute, Venney thumped a shot against the base of the upright. Finally, during injury time, there was a massive appeal for a penalty. All eyes turned towards the referee, who waved it away.

A week on the road could have easily ended with the maximum haul of 9 points. It is certainly a kick in the teeth to only get 2. However, I have generally been impressed with our football and the wins will surely come. It is a long season and I believe that there is no need to be alarmed at this stage.

Back to the Myenergi Stadium on Tuesday (7.45pm) when we welcome Sheffield FC. A win would give everyone a massive boost. Please come down to cheer the lads on!