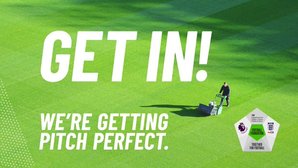 The Owls score with funding success!

There’s good news for North East Lincolnshire as Cleethorpes Town have been awarded a Pitch Preparation Fund grant from the Premier League, The FA and the Government’s Football Foundation.

The Pitch Preparation Fund was set up in support of the game, which is currently facing unprecedented challenges because of the COVID-19 outbreak. The Fund is providing grants to clubs that have lost out on normal revenue streams during this difficult period.

The funding will enable Cleethorpes Town, who play in the Northern Premier League South-East Division, to prepare their football pitches so that they are match-fit for when it is safe to play football again, following Government advice.

They can use their grant towards to help pay for the cost of materials, work such as verti-draining, chain harrowing, rolling, over-seeding, fertilising, weed-killing, and routine preparatory work such as grass cutting and the setting out and line-marking of pitches.

Clubs and other organisations are also being given access to the Football Foundation Groundskeeping Community. This is a free online resource the Foundation developed with The FA and the Grounds Management Association, containing advice and guidance. Anyone in North East Lincolnshire can sign up at https://thefa.hivelearning.com/groundskeeping

“This is tremendous news! I would personally like to thank the Football Foundation and the wider football family for this vital funding.

It will allow us to make pitch preparations for when the game resumes, which we all hope is not too far away. In the meantime, stay safe and I look forward to welcoming everyone back to Linden.”

“This is a vital grant to help Cleethorpes Town get their pitches match-fit.

The Premier League, The FA and Government’s Football Foundation exists to help provide quality infrastructure at the lower-levels of the game. Pitch Preparation Fund grants like this one are giving a helping hand to clubs across the country to get their playing surfaces ready for when the game is allowed to begin again following government advice.”

The Football Foundation is a charity funded by the Premier League, The FA and the Government, through Sport England.