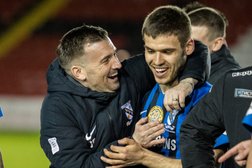 The Club is delighted to announce the appointment of Jon Davy as the new Head of Youth Development.

Jon will assume responsibility for players in the very important development phase from the U17s to U23s age bracket. The move comes as the Owls look to strengthen their player pathway and provide a clear link to the current first team.

The young players could not be in safer hands. Currently Assistant Manager for the first team in the BetVictor Northern Premier League, Jon has a wealth of over 23-years coaching experience to call upon, as well as holding the UEFA A Licence.

With a proven track record of developing and promoting local talent, the Club envisages uncovering the next wave of future stars for the Owls. The new pathway will have an ethos of personal development over winning and will also follow a specific age phase curriculum.

Teams will train twice a week, working on strength and conditioning in one session, with the other devoted to technical and tactical development. Games will be played on Sundays. This structured approached will be complemented by players being invited to train with the first team, with the potential to become part of the senior matchday squad.

When safe to do so, Jon & his coaches will be holding open training and trials to recruit the best young players in the area.

Anyone requiring further information about this exciting initiative, please either message us or contact Jon Davy direct for an informal chat.