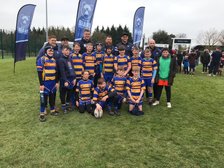 Just the 2nd game with the new format of playing on a full size pitch and contested scums. Clevedon won the toss after deciding to play quarters with the Weston coach.
The game from start ebbed and flowed with Weston taking an early lead try but Clevedon levelling the game 10-10 after the first quarter.
The second quarter, certainly was a game of two halves, with Weston dominating the first and going 20-10 up and starting to dominate the play throughout. However, these group of young players decided it wasn’t going to be Weston’s day and the last 7 minutes ran riot working together as a unit and team. From winning, dominating the scums and rucks allowing the backs to run free and score some great tries.
From that quarter and the final two, Clevedon’s pack worked and grafted hard to dominate the game. Which allowed for some fine running game from the backs.
What a performance, we coaches couldn’t be more proud of this squad with everyone pulling their weight and putting a shift in today.
Special mentions to Coaches player of the match, Charlie Andrews. Who had an outstanding game in the back line, putting some crunching tackles in and scoring an outstanding running try.
Forwards man of the Match going to Louis Bowen who only joined us this season and playing a major role in the centre backs line, with some great running and use of team mates outside him.
The backs man of the match Hamish Squires who yet again after winning man of the match last week, out some great ball running and crunching tackles in.
A few other mentions, to Tom Hutson’s try saving tackle, straight out the book.
Malin Reed, quick thinking fox like decisions playing scum half and bagging a couple of well deserved tries from doing so.
A big mention to all our forwards, today our unsung heroes doing the hard dirty work who dominated every scum.
Well done boys, well deserved.
Share via
FacebookTwitter
https://www.clevedonrugbyclub.
Recent news