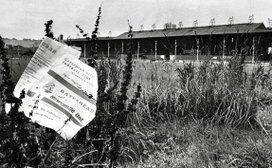 When the fixtures do come out theres quite a shock as they find their first fixture is to travel the furthest distance in the league. They find they are heading North up the A1 to the home of Gateshead

The maps come out and the players and officials find it’s a 320 mile round trip for the game to be played on August 18th 1973 on the Tyne & Wear. It’s a fair distance and players must have been checking to see if there is a team bus or are they to be paid mileage.

Its 7 days before the season starts and there becomes a massive change in circumstance. Clifton fc are forced to delay their debut as the Durham club have to call the game off. Gateshead, the former football league club were voted out of Division 4 to be replaced by Peterborough United in the league in1960 .

The club were Wearside League runners-up in 1970–71 and after another failed attempt to re-enter the Football League subsequently joined the Midland League. They have to find 7000 pounds in the next week or go into liquidation.

Gateshead cannot meet the league requirements and the team folds. They become the first casualty before the season even starts and the Midland League begins with one team less.

The false alarm means that the club have to give match practice to several first team members in the reserve teams game in the East Midlands League Division game at Green Lane. They play newcomers Leicester Southend. They will need a fit squad for the 2nd game in the league in midweek

The manager Bryan Harrison names a squad of 13 players for the second Midland League game, a much preferred short midweek trip to Grange Park to play Long Eaton United on Wed 22 Aug 1973

* Up date * It would have been nice if the Club Officials had told us that we were actually playing a League game against Leicester Southend!

We came off at the end of the Game thinking we had won a hard fought Friendly!

Having played against Blaby Boys Club on a couple of occasions I knew Leicester Teams could play! ....some of my Teamates were perhaps not aware of this! ....However we won ...but it was a bit of a Bruiser!

We played on the 2nd Team Pitch ...The one nearest the Fairham Hotel. Pre-Match I was setting out the Flags on the Fairham Hotel touchline when I noticed a Spike sticking about 1" above the surface just infield from the touchline. After some hectic digging the metal part of a Garden Fork was extracted! ...I kid you not! ...This is true! ...My "Ground staff" Training at Notts County paid off!