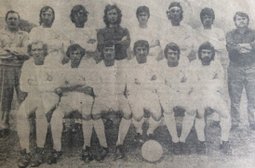 A new pavilion and canteen facilities costing 14,000 pounds are to be built on the Clifton Fc ground. This is part of the development programme for Midland League membership.

Mr John Raynor, the club secretary, said that he hoped by next month the work would have started. It will be done with as little inconvenience as possible and would involve a brick building being built around the existing wooden ones.

Debutants make the news for both sides

Clifton are forced to make two changes for their Midland League cup visit to Eastwood Town. Andy Simpson and Peter Liversey are out through injury.

A place will soon be made for 17 year old Dave Clemerson who is turning in regular star performance for the second team. Defender Clemerson is one of the many Clifton youngsters who are making rapid progress.

Eastwood were in serious trouble as Muir hit two early goals for Clifton. There were further problems when Rutherford went off with a groin injury.

Newcomer Muir was showing nice touches for Clifton and in 10 minutes he profited from a miskick back pass to put the visitors ahead.

In Eastwoods first threat Merritt shot over, but Muir struck again for Clifton in 18 minutes. Foster, the Clifton keeper twice saved well to prevent Eastwood from fighting back in the first half.

Eastwood resumed with an all out attack and in 62 minutes Gregory reduced the leeway after a Clifton defender had played the ball onto his own crossbar.

After 65 minutes Merritt equalised after a hectic spell of pressure around the Clifton goal.

And with only a minute left substitute Carl Gregory crowned a memorable debut when he notched the winner from close range after Foster could only parrya shot from Merritt.