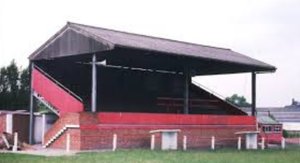 Of the costs for the new building programme for a brick pavilion and new canteen facilities, the club will be finding a third of the costs.
Nottingham Corporation are giving a third and the National Association of Boys Clubs a third

Before a crowd of 180 Clifton travelled to Ilkeston Town. An Alan Ellis piledriver shattered Clifton in the first half of this Midland League match at Ilkeston this afternoon, after his team had allowed an early lead to slip away.

Ilkeston won without extending themselves although their sometimes over casual approach could have cost them a point. Town began well and took the lead in the 5th minute when an Alan Ellis corner was met by a firm Terry Stevenson header. The goal exposed the Clifton defence who were static

The Robins thought they should have had a penalty when Les Tindalls shot following a close range indirect free kick appeared to be handled on the line.. Clifton equalised on 41 minutes when keeper Paul Daley dropped a corner and future Ilkeston striker Ian Muir scored from close range, but Ilkeston regained the lead a minute later.

Phil Radcliffes run drew the defence and his pass inside found Ellis, booked earlier in the first half for a foul on Walsh, who cracked a 30yard screamer into the top corner.

Town looked to be home and dry on 75 minutes when good play by Dick Smith down the flank led to Tindall supplying Radcliffe to slot the ball home. However, sloppy play by Stevenson allowed a through ball to reach substitute Liversey who ran on to lob the ball over the advancing keeper Daley four minutes from time but it was too little too late for Clifton,

In the week the Clifton All Whites Youth team were drawn against Stoke City in the All England Youth Cup a competition that they had done so well in preceding years. unfortunately they came a cropper against a much stronger side losing by 5 goals to none.

All other parts to the first season in the Midland League can be found on the homepage in the Information section (top right). "A Blast from the Past"