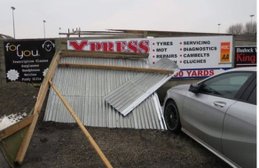 Clifton entertaining Sutton Town in Midland League game at Green Lane tomorrow (2.30pm) have included two reserves in the 13 players from which the side will be selected.

Simpson now fit again after injury, is included in the party, along with two reserves, Walker and Cuthbert. But there is a doubt about Hallott who is suffering from a knee injury.

Sutton Town hit back after early Clifton pressure in the clash at Green Lane. Clifton looked dangerous in the early exchanges but their eager forwards failed to convert an accurate Shipley free kick that eluded the Sutton defence.

Straw, the Sutton keeper was soon in action again making a one handed save from Kalisaks rising drive. In Suttons first attack Onions was unlucky with a fine header that flew just over the bar, after he had outjumped two Clifton defenders.

Sutton gradually began to play with more cohesion and only a diving save by Foster in the tenth minute stopped Dewsbury who had broken clear.

Liversey almost put Clifton ahead in the 28th minute but his high curling shot hit a post and went behind for a goal kick. Only seconds later, Walker brought a fine save from Straw with a fierce 30 yard drive.

A strong crossfield wind was making play difficult for both sides The fierce wind finally took its toll in the 38th minute when it partly blew down the impromptu Clifton scaffolding stand. A delay took place while the structure and tarpaulins were made safe.

Ball ran into space in the 40th minute to collect Pulacs pass but his shot was high and wide. Two minutes before the break Clifton might have scored when the ball ran loose after Straw failed to hold a high centre, but Byrne headed wide after a goalmouth scramble.

Clifton lost a good chance to climb away from the bottom two of the Midland League when they only managed to share the points with bottom club Sutton on Saturday.

Cliton produced some attractive football but it wasn’t good enough to break the goal deadlock and they had to be content with a single point.

Their position in the league table is somewhat disappointing, despite the fact they are experiencing their first season in the competition.

Having played four more games than Saturdays visitors and being only two points in front of them doesn’t point to a very happy future unless playing results can be improved.

But club officials are still quite happy and feel that this present season must be one of consolidation rather than too much progress.

One good thing that came out of Saturdays game was that at least Clifton managed to end a run of goals against, having given away nine in the three games prior to the Sutton clash

The reserve side on the day were away to Gotham reserves in an East Midlands game and will choose from: Moore, Clements, Walsh, Ford, Hudson, Brookes, Cousins, Edwards, Sinlair,Charlton, Brinklow, Lockwood and Clarke.