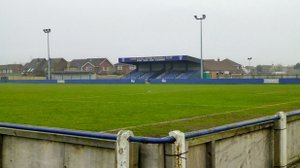 Long Eaton manager Brian Daykin brings in striker Doug Hickton against newcomers Clifton for the game at Grange Park. Local Clifton lad Steve Holder who had played for the 1967/68 All Whites team is also selected to play for Long Eaton

The All Whites with no injuries select the same squad that turned out in the reserves game on Saturday at Green Lane. Clifton newly elected to the Midland League play with great passion to gain a hard fought draw and pick up their first point In their Midland League debut

Although lacking in experience Clifton often pose problems for United and do enough to suggest they will be no easy opposition in the season ahead.

In defence Clifton hold firm in this dour battle of limited goal chances.

So with great expectation and confidence Clifton look to the weekend to their first home game against Retford Town after gaining their first league point. The wooden clubhouse – the one Alfreton Town said was not up to the standard of the league will be throbbing.

Their games are coming thick and fast for 2 days later on Bank Holiday Monday they travel to the coast to play Skegness Town.