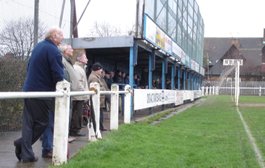 Still undefeated the newcomers come to play the Eagles full of confidence at King George V playing fields Arnold . A ground that in future years was to be closed to football and sucked the life out of an historic Nottingham football team

Clifton figured in two early raids, first Piggott had to push over a Daykin shot for a corner then when Archer broke away down the right, Byrne sliced the ball wide of an empty net.

After Hanson had had a goal disallowed, Arnold went in front after 8 minutes.Brookes centred from the right and Raynor was on hand to head the ball past Foster.

A minute later it was only quick thinking by Young that averted a further goal. He whipped the ball off Ranns toe.

Five minutes after the interval, Clifton were back on equal terms. Archer took a corner on the left and although the ball was partially cleared it fell to Hallot, who put it well out of Piggotts reach.

Arnold regained the lead in the 50th minute, Rann rounded the defence and crossed for Raynor to score.

Roger Rann added a further goal in the 70th minute to give Arnold a convincing win against the newcomers Clifton to give them 9 points out of ten in the League.

Defeat by Arnold does not cause any great problems for Clifton who have made useful progress in their first four weeks of the Midland League.
Clifton feel four points from their first four games is the kind of start they wanted and the 3-1 defeat to Arnold was no disgrace.

Manager Bryan Harrison is particularly pleased at the way the side has been able to last the pace. “In the first few games we were struggling to reach 90 minutes but now we have improved quite a lot. We are not flagging at all.”

Do you remember these times, were you a player or just a supporter. To comment you need to register as a supporter to the website. Your email is hidden.