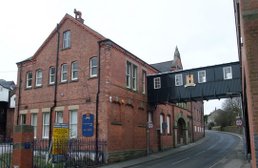 Clifton are very pleased with the performances of new player Peter Liversey. He played for Burnley Boys and was on the books of Burnley before moving into the area.

Said a Clifton spokesman “Reggie should make a big difference for us. We all know his goalscoring capabilities and that is lacking at present.

In the Saturdays home game Clifton lose heavily to Bridlington Trinity 3-0, it was their first half showing that let them down. They gave the Yorkshiremen quite a gruelling time in the second half but once again lack a real striker.

Clifton reserves do better by beating Draycott Amateurs by a single goal.

After two defeats Clifton travel to Kimberley in need of points to bolster their position in the league. A good old pint of Hardy Hansons bitter from the brewery above might do the trick

Clifton make the first serious threat, Stead coming off worse in a duel with Liversey, King racing across to clear near the goal-line.

Kimberley pressure gains two quick corners, but they fail to press the advantage home. Sheppard missed a golden opportunity to put Kimberley in front, but the angle proved too much. His effort travelled along the crossbar.

Foster, Cliftons goalkeeper’ was frequently in action gathering high and low balls with comparative ease. Deakin was a live wire in the Clifton attack giving the home defence a real headache.

Then Liversey beat Yeomans for possession putting across a neat touch for Kalisak to put Clifton in front after 41 minutes.

Kimberleys persistence in the second half brought the equaliser through Tilson after 68 minutes. 5 minutes later Deakin put Clifton in front again in what proved to be the winning goal.

Kimberley dominate the play territorially, and the one player that held them at bay was Foster the Clifton keeper who was in great form against his former club.

Graham Deakin was particularly pleased to open his account after hitting the woodwork many times in the previous matches.