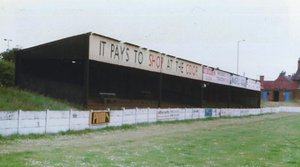 Of the victory at Kimberley last week, secretary Mr Jon Raynor says "I don't think we were given enough credit last week in some quarters."

We were well on top and might well have had more than two goals.

Clifton have made a fairly good start to their programme with 7 points from as many games and they are becoming quite an attraction on the estate as more and more flock to their Green Lane ground.

Says secretary John Raynor “ The public are getting quite interested and our gates are hitting the 250 to 300 mark. Unfortunately we now face 3 matches away from home”.

Of the victory at Kimberley, Mr Raynor says " We were well on top and might well have scored more than 2 goals.

Saturday 22 September sees the All Whites travel to Priestsic Road to play Mansfield club Sutton Town. Although Sutton looked the most likely team to score, their goal in the 11th minute was more or less a gift.

Goalkeeper Straws goal kick bounces over the Cliftons defence and Paul Aldred runs on unopposed to shoot past Foster giving the keeper no chance.

Clifton surprised their more experienced host with the quality of their football and could quite easily have gained a draw.

Although they are highly satisfied with their start to their initial season in the Midland League, it seems they are lacking in goalscoring and but for this defect could have been higher up the table.

In eight outings they have scored only six times and conceded ten, yet manager Brian Harrison is convinced they are gradually getting to grips with the demands of the competition and will finish in a highly respectable position.

All other games in the first season of the Midland League can be found in the Information section at the top of the home page.