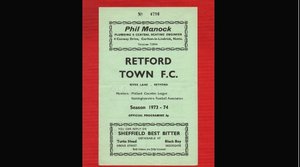 Chances went begging to both sides in this Midland League encounter.

Cliftons Byrne miskicked in front of an open goal in just the 2nd minute and Retfords Dennis Dobb shot straight at the keeper after breaking clear down the right hand side of the field.

Retford managed to keep command in the first half and both Popple and Matthews went close with long range efforts.

2 minutes before half time Dobb put Retford in front. He accepted Sadlers pass and beat two defenders before placing the ball in the net.

Retford managed to keep command in the first half and both Popple and Matthews went close with long range efforts.

If Clifton could translate the chances they are creating into goals they would be making a serious challenge to the leaders.

That is the opinion of Cliftons secretary John Raynor who says “We are looking for perhaps what every club in the country is looking for, a striker who can score regularly. It is disappointing and frustrating to see the chances we are making just frittered away..

It was the same last week at Sutton and this week at Retford, in each game we lost 1-0. At Retford we played some great stuff until we got to the penalty box”.

Mr Raynor added that manager Brian Harrison had two strikers in mind and he hoped that one of them would be signed up shortly.

Cliftons defence is in great form with the experience provided by two ex Nottingham Forest players in John Hallot and Dick Shipley.In goal Stan Foster is also in outstanding form.

On the same day Clifton reserves were held by kimberley Town reserves to a 1-1 draw at home at Green Lane.