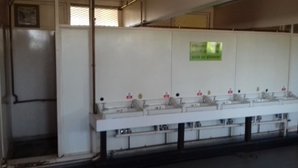 Clifton All Whites - The Players Story 10 of 24

By the end of their first season in competitive football
Both Clifton All Whites and Thistledown Rovers under 12s sides had come out of it with full credit.
The difference of ages in both teams took its toll towards the end of the
season, especially the 9 year olds playing against 11 year olds, but it was a great learning curve that left them with a experience for the oncoming 1964/65 season.

The one thing that bugged committee members and parents was the size of the opposition Phoenix Athletic in the final of the Tommy Lawton Cup played at Meadow Lane. What had they been fed on, how come a couple of players were growing sideburns. The 5-0 defeat for All Whites testified the case, not just the scores but the size of a couple of the players, big Willy at centre half was a good example.

Nevertheless if it wouldn’t have been for the mud the All Whites could have bagged a couple of goals for themselves to make the score more creditable. Eddie Lambley twice chipped the keeper with one effort getting stuck on the goal line when a goal seemed certain.

Eventually the Young Elizabethan League looked into it more closely and acknowledged that Phoenix Athletic had been playing players that were over the age of 12. The decision was to strip them of both the League title and the Tommy Lawton Cup, a decision that probably is not on record 54 years later.

The summer of 1964 saw the committee plan for the new season. A lot of the younger players were still eligible to play in the new Junior Under 12s league. Some of the 9 and 10 year olds had experience from the season before and were now streetwise and knew what the game was all about.

It was decided to enter a Clifton All Whites under 13 side in the Church League mainly from players that had played before. Eddie Lambley was made captain. Thistledown Rovers re-entered another under 12 team in the YEL but this was mainly for the younger newer players, there was no shortage of players wanting to play.
Several of last year’s junior players were now overage and would now have to play in the YEL Intermediate U14 League 1964/65. Due to the foreseen U14 player shortage, the pre-season saw a search for more players who qualified to play in this new age group.

Former U13 1963/64 players lain Walsh, Pip Holloway, Andy Wray and Terry Moseley were moved up to the new U14 Team. Eddie Young and Mick Fisher were there at training sessions and were added to the squad. Frank Cousins who was related to Kevin Flynn was talked into moving from Parliament St. Meths.

Brian Shaw came up from the bottom of the estate having played for the 28th Boys Brigade as a left back and John Boulter arrived as a right back. Both Boulter & Shaw would later become prolific goal machines in their post All Whites eras playing in their preferred Centre Forward position. Both can be considered as the best Clifton player’s never to turn professional.

The team were always short of players and were supplemented with Under 13 players, Steve Holder, Frank Cousins, Kevin Flynn and the under 12 Michael Dilnot in Goal. This team was full of goals. The Teams performances were once described as “football heaven”. Such was the talent within the Squads. This was the start of the domination of 1960s Nottingham football for Clifton All Whites.

But this was a time when the younger players wanted to play with the “Big Boys” and show what they could do! They were so good they didn’t look out of place! This “Rustling” of players then gave the “lesser players” of the U13 & U12 1964/65 squads the chance to play and improve and even offered the opportunity to carve a niche for themselves!

When the “”Shanghaied” Players returned to their respective teams they would, no doubt, show a level of skill and expertise derived from playing with and in an Older Age Group!
This “Conveyor Belt of Team selection” would lead the 1964/65 YEL U12’s, finest, having the opportunity to show what they could do at the next, and in Clieto’s case, higher age group levels.

So basically “Conveyor Belt of Team selection” meant .... to paraphrase the Old Football Adage “If you were Good enough! ... you were Old enough”!

The season began on September 5th with the Under 14s and the Under 12s on Farnborough Fields, both against the relevant New Clifton sides. The U14s started off their campaign with a 15-0 victory and the U12s completed a 6-0 win.

As for the Under 13s, they started their season with a midweek fixture and were playing on the next pitch to the Under 14s on Farnborough Fields. Because the U14s  had an earlier kick off, Dick Lambert came across and borrowed Steve, Frank and Kevin because they were short and they were all required.

lain Walsh was ill with the flu but nevertheless was pulled out of his sick bed to make up the team. Because of a delay in the U14s match the U13s had to pick a side without the three players that had been “borrowed”. The match ended in a 6-0 victory over the team that was to finish runners up to them in the league and cup, Bulwell Hall Colts, captain Eddie Lambley bagged three, although his third came from an inswinging corner which hit the crossbar and rebounded off the back of the goalkeeper’s head and over the line.

5 September 1964
(YEL Intermediate Division)
Clifton All Whites 15 New Clifton 0
Carlton Rangers 2 Parliament St Meths 8
Widecombe Forest 7 45th BB Coy 2
(YEL Junior Division)
Clifton All Whites 6 New Clifton 0
Nottm Church League (midweek)
Clifton All Whites Under 13s 6 Bulwell Hall Colts 0
As for the iconic picture to go with the story, this is a recent picture of the
showers and sinks in the upstairs changing rooms at Famborough Fields.
For people who had spent time playing football at Clifton it comes as a great
reminder. Still in the same condition as when the building opened in the early
60s and with the same warning to not wash boots in the sinks. Be aware
never cross the Parks Superintendent George Litchfield, a man so proud of
his patch and of the changing rooms. They had to be spotless for the
Sunday afternoon games the next day.