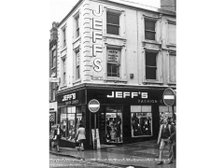 Clifton All Whites - The Players Story 11 of 24

With so many players wanting to play, the reorganisation of the club meant they were now running 4 sides

All Whites Under 14 and Under 12 as well as Thistledown Rovers Under 12s in the Young Elizabethan league as well as the Under 13s in the Nottingham Church League, captained by Eddie Lambley.

The Under 13s started their season in the Church League with a thumping 6-0 win against arch rivals Bulwell Forest Colts. The Forest Colts were to win their next three games scoring 19 goals and conceding 2.

After a winning start for all teams in the Young Elizabethan League, the following week saw a culture shock for the Under 14s against their arch rivals Parliament St Meths who the previous season had beat them in the Church League Cup Final.

The game was played on Pitch 1 at Farnborough Fields, a pitch that Dick had arranged with George Litchfield, parks superintendent to be their regular home pitch. This was the pitch nearest Farnborough Road. It was a hot sunny afternoon and the team wore their brand new Umbro kit, White shirts with a red trim. Once again Holder, Flynn and Cousins were drafted in from the Under 13s.

Clifton All Whites, playing their second match of the season in the Young Elizabethan league (Intermediate) met some strong opposition in Parliament Street Methodists, and were beaten 2-4 after a good exciting game which kept a large crowd on their toes throughout.

The Meths were really on the ball with a goal from a corner in the opening minute. With All Whites fielding an unusual and untried line up, it was a case of who didn’t, mark whom and in the resulting melee the unmarked Slater side footed the ball into the net from close range.

It was end to end football with Parliament Street taking the lead through Wells, their centre forward . Back came All Whites with Flynn, Perry and Cousins giving the Meths keeper a busy time, and with two minutes to go before the interval, a corner from Perry was met by Mosley with a full on volley from the edge of the box to make it 2-2 at Half Time

In the second half All Whites went all out to get in front with Eddie Young moving up at every opportunity to get on target but he had bad luck with one effort, hitting the crossbar and then a good header was superbly saved by the keeper.

But this was not to be All Whites day, for a long clearance by Parliament Street caught All Whites defence on the wrong foot with Wray giving away a corner and from the kick Parliament Street regained the lead with a fine header by Wells making the score 2-3
Still All Whites tried for an equaliser in the final minutes. Young forced the ball home but to their disappointment the referee adjudged him offside.

Buckley then scored a fourth goal for Parliament Street. All Whites put everything they had into getting an equaliser but they just could not get the ball into the net.

Collectively, the team didn’t like it one bit, there was no bitching about who did this and that and the feeling was that the team weren’t going to let this happen again.

Clifton All Whites Under 12s carried on where they left off the week before unbeaten in 3 games, still not conceding a goal and now a goal tally of 21 goals for.

As for the younger players of Thistledown Rovers, a great start to their season winning both games against Beechdale Rovers and New Clifton with an aggregate of 12 goals to 1

The close season break had seen interaction between members of the 3 All Whites teams. A bond was building within the group who would take trips enmasse, in the School Summer Holidays, to see what Nottingham had to offer. Trips to the Excel Bowling Alley and The Elite Picture House on Parliament St. helped cement this bond.

Nottingham was buzzing and at this time lived up to its billing of “Queen of The Midlands” with its extensive offering of Independent and Major Outlets! The aforementioned Excel Bowl on Barker Gate - 48 lanes over 2 floors - had opened in 1964 and at one point was running 24 hours a day due to demand!

This was the swinging 60’s and the 11 to 13 year olds were “with it” …..being a Mod was fashionable and group trips to Hockley, our Carnaby St., were de rigueur. Jeff’s and Continental House are a couple of names that spring to mind and even gear[clothing] from C&A between Bridlesmith Gate and Broad Marsh was acceptable at a push!

The lads recall their first visit to the Excel Bowl. Eddie Lambley had been to the Bowling Alley before but the rest of them hadn't. ....as an "expert" he bowled the first ball leaving 5 Pins standing! Iain Walsh was so anxious to have a go he picked his ball up and launched it at the remaining 5 Pins! .....how dumb can you get! …..The lads burst out laughing ….Group Building par excellence!