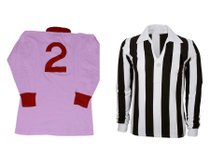 Clifton All Whites - The Players Story 12 of 24

They had played 4 games and scored 27 goals without conceding any. Bulwell Hall Colts who All Whites had beaten 6-0 on the first day of the season went on to score 19 goals and conceding 2 goals in their next three games.

Before the return game played at Bulwell, the Colts after their recent impressive form were certainly worried about the opposition . The game was played just up the road from the now extinct Lido on Bulwell Hall Park and to get from the changing room to the pitch was a route march in its own right.

Once again prolific striker Eddie Lambley, now a marked man, scored another 5 goals, Bulwell never had a shot at goal. In other league games Readford Sports who similar to All Whites were running teams in both Young Elizabethan Leagues hammered Hucknall St Johns who were based at the church on Nottingham Road.

As the weeks went by the Under 12s of Thistledown Rovers in the Young Elizabethan league found that their age had caught up with them. They were playing teams that were 2 years older. They had won their first 2 games but the next week they played the All Whites Under 12s at Farnborough Fields and were beaten by 9 goals to 2.

The following week they played the other Junior league favourites Clifton Athletic and were trounced 13-0.

Another new Clifton team opened their account in the league. Clifton Dynamos started by beating Beechdale Rovers 3-2. Rovers took the lead early on and retained it until half time. For Dynamos Terry, Orange and Radford showed up well. Dynamos forward line of Russell, Dexter, Wragg, Dennis and Bradshaw were causing havoc and eventually Barratt scored the equaliser. Russell scored the winner for Clifton Dynamos.

By October the Clifton All Whites youngsters had won 3 games out of 3 and the next fixture saw them play against old adversaries Phoenix Athletic. This was an opportunity to gain revenge against a Club that had played overage players against the All Whites U12’s of 1963/64 in the Final of the Tommy Lawton Cup.

This revenge would be twofold as Phoenix had used the same ploy to wrest the YEL Junior Title 1963/64 from Thistledown Rovers …All Whites sister Team.

Although Phoenix Athletic had been stripped of both Titles the Silverware was not forthcoming to, either All Whites or Thistledown Rovers, the rightful recipients.

From the start All Whites were determined to maintain their 100% record and although Phoenix put up a good fight they found All Whites were too strong. All Whites won by 5 goals to 1 and have now won 4 games out of 4.

The following week Thistledown Rovers played Readford Sports. A good clean Junior league game with Readford Sports ten men on top in the first half and leading by 6 goals to 1. Thistledown recovered in the second half but Readford won 7-4. For Thistledown Haywood and Alcock were outstanding.

Clifton Athletic playing in their 2nd game thrashed Beechdale Rovers 14-0. Yet another talented Clifton team who were to become rivals to the All Whites.

Other YEL Under 12s Results

Clifton All Whites were much too strong for the Silverdale Tigers who could have kept the score down if they had held their positions and not chased the ball.

Parliament St Meths, who had beaten All Whites recently are still the leaders after beating Clifton side Widecombe Forest Colts 4-2 thus winning all their 4 games.

Highbury Vale BC beat Carlton Rangers 9-2 to make it played 3 won 3 for the Bulwell based outfit. The Intermediate League is now taking shape with some tasty contenders to boot!

Clifton All Whites travelled to Carlton to meet Phoenix Athletic in the return game. Phoenix were to field a stronger team than when the teams last met on 19 September 1964.

All Whites, however, were to field a team minus Iain Walsh who was out with a groin strain and goalkeeper Pip Holloway who was suffering with a hand injury. Michael Dilnot the 11 year old veteran of the 1963/64 Church League Team was drafted in. No problem there then.

But things started to go pear shape in the dressing room before the game. Dick Lambert announced that there had been a laundry mishap. The new Umbro White Shirts with Red trim were now Pink with Red trim!

Dick told the players not to worry as he’d managed to borrow some old shirts as a replacement kit. He then produced some 1950’s style shirts! Juve? More like Notts County to be precise! ….well they didn’t go down well with the players!

As they entered the pitch the Players bore the full brunt of the Phoenix lad’s Micky taking! The signs were not good! Phoenix started the game at a fast pace and soon had the “All Whites” defence in trouble. It was no surprise when they took the lead with a powerful drive from Rayns.

After 9 minutes the game took a disastrous turn when full back Wray scored an own goal whilst attempting a clearance. Thus giving Phoenix a 2-0 lead!
All Whites did not sit down and take defeat, their fighting spirit shone through. Moseley collecting a ball , on the half way line, raced down the centre of the field, slipped the ball to Perry who rocketted a shot into the top corner from the edge of the box making the score 2-1.

This really put the fight back into the “All Whites” and half way through the second half, Moseley scored a great “Hat Trick” for the visitors ….Three goals in 10 minutes making the score 2-4!

Shortly afterwards Perry scores his second goal to put the game beyond doubt! The game certainly wiped the smile off the opposition ‘Mickey’ taking faces

Other YEL Under 14 Results