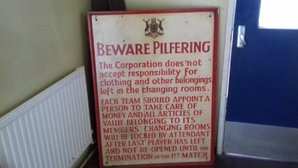 Clifton All Whites - The Players Story 13 of 24

Playing and winning all four games, scoring 27 goals with none in reply
November saw their state of intent when they played Hucknall St Johns in a one sided affair by overwhelming the opposition by nineteen goals to two.

The talk was how did they manage to concede their first ever goals in the league, nevertheless 100% points from 5 games scoring a massive 46 goals
In the Young Elizabethan League both the Under 12s and the Under 14s were now top of the league.

The Under 12s Junior All Whites were hard pressed to hold on to their 100% record in this match. A mistake by the home defence allowed Cotterill to open the scoring. Cotterill scored a second goal to allow All Whites to take the points.
Other Junior League games Bulwell Hall took a well-deserved point from Clifton Athletic
Bulwell Hall Colts 2 Clifton Athletic 2
New Clifton 1 Readford Sports 7

45th BB Coy 0 New Clifton 2
The Boy’s Brigade were handicapped with only having 9 players. Lockton, Allwood and Hickling defended well but eventually the strain was too much.
Shepherd netted twice to give New Clifton the points.

Likewise Highbury Vale BC whilst being on an adjacent pitch taunted the All Whites U14 team saying they were crap and they would tank them.
It didn’t, bother the All Whites lads, after all “Empty Vessels make the loudest Noises”, they were magnanimous, they never took the “Mick”, they were better than that. They just waited for the day when they would be on the same pitch and then they’d let their football do the talking.

In the YEL (Intermediate League)

Another team playing their first game were Morley YC and they must have wondered what had hit them.

All Whites once again reached double figures at the expense of newcomers Morley YC who must be given full credit for doing their best.

The other game in the Intermediate league was a high scoring affair with Silverdale Tigers now becoming a much improved team.

Playing 2 games in one day was not unusual in the YEL!

Throughout the season Iain Walsh, Terry Mosley and Andy Wray had playing for the Corpus Christi school team. Like most lads they would play Saturday mornings for school and then in the afternoon Young Elizabethan league football.

For the school team, they had a forward who was big for his age, physically 2 to 3 years older, mobile and could score goals, two attributes that the 1964/65 Under 14 were lacking.

Vernon would shortly put pen to paper however in the meantime

In the YEL (Junior League)

This game proved to be a real thriller between two unbeaten teams. Readford were soon ahead through a bad clearance by Macleese which allowed Readford’s centre forward Mead to score.

All Whites fought back and equalised by a good goal from Inside Right Ekrem. Readford went on to play some delightful football with All Whites defending hard.

Great goalkeeping by Michael Dilnot kept the Readford Sports from scoring more than once in the second half through outside right Meakin with a fine shot, but All Whites fought back and levelled the score with a second goal from Ekrem.

All Whites snatched the winner with a great goal by Clements from way outside the penalty area.

In other YEL Under 12 Junior games

Phoenix certainly shook Clifton Dynamos scoring after 10 seconds and then again after 2 minutes. Dynamos fought back brilliantly and prevented Phoenix from scoring again. Just before half time Bradshaw reduced the lead with a fine goal. They played their hearts out but could not score an equaliser.

In the YEL (Intermediate League)

Vernon Rogers was to make his debut in the eagerly awaited match against Readford Sports. This Away game was played at West Park, Long Eaton in November 1964. Iain Walsh had recovered from his Groin injury and returned to the Team at Right Back. The Team would once again play in the All White kit albeit the U13’s White with Green Trim shirts!

An All Whites player recalls the match as follows:-

It was great day for a Match …Sunny but not hot and the team buoyed by our new No9 quickly set about their business. Steve Holder scored the first goal and Vernon scored a first half Hat-trick making the score 0-4 at halftime. Shortly into the second half Steve Holder suffered an injury that was to remove him from the game. This gave Readford Sports the impetus to score 2 quick goals against the 10 man All Whites team to make the score 2-4. The All Whites, however, quickly rallied with Vernon Rogers scoring 4 more, so accumulating 7 goals, before Allan Perry rattled in the ninth as the Moon rose and delivered its autumn chill and the result 2-9.

There was once again no Micky taking by the All Whites as they and the vanquished Readford Sports Team made their way back to the Changing Rooms.

Sunday morning training for All Whites turned up a great surprise as the lads, including their new No9, were told to go to the changing rooms and don their new kit for a team photograph. The photographer told the team they will be appearing in the newspaper. The lads were so excited they thought it was going in the Nationals, the Daily Mirror or even the Times. The innocence of the youth of the day!

When members of the team asked why the Photograph had been taken? Dick Lambert spilt the beans about the team going to play in Holland. The players were told before the Club Officials and Player’s parents. The Players were ecstatic as some had never been abroad before.

A couple of weeks after the 1965 Den Haag Tournament trip announcement the Viability and Funding meeting took place at the newly built Youth Club (Spiders) where the Committee put forward the idea of the team going to play in the Den Haag football tournament.

A good selection of parents were in attendance to discuss and respond with suggestions of how they could fund the trip. Discos at Holy Trinity, Jumble Sales, What about a Boxing Night at the YMCA in conjunction with Clifton Boxing Club. There was no shortage of ideas
Alf Mosley suggested that his drama group would put on a production to raise funds. He was adamant about this and said “His Drama group, The Nottingham Thespians” as he said it; there was a ripple of surprised laugher.

Whether they did a play is unknown to this day.

This was how the close knit community of Clifton stuck together, volunteers were aplenty, and the parents had given it their full backing. The self-construction of St Francis Church and the building of Clifton Boxing Club was a great example of the Great Spirit there was in those days.

The meeting was a great success, it was on, the fund raising committee was selected and the different events were being organised.