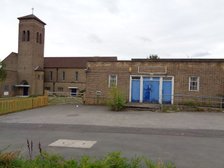 Clifton All Whites - The Players Story 14 of 24

One of the first fund raising events to fund the team going to play football in Holland was the Trino Disco’s.

Dick Lambert got permission from the vicar at the Holy Trinity church at the top end of Southchurch Drive to hold discos for the local kids.

Wednesday was to be the night and Trino was to be the place! But how much? … Dick Lambert had some posters printed but unfortunately had omitted the Admission 2/- text. Iain Walsh remedied this with his John Bull printing set and a biro, they were the days computers were a thing of the future.

The revised posters were then deployed throughout Clifton and it was a case of “Stage it and they will come” …..And they did in their droves …..Trino was packed every Wednesday!

The Rolling Stones were top of the charts at the time with “Get Off My Cloud” and soul music was just coming to the fore with classics like “In the Midnight Hour” by Wilson Pickett.

The lads would bring in their favourite vinyl 45 rpm records they had bought from the first floor of the Co-op - now Wilkinson’s - to play. Other lads would journey to town to stand for hours in the old record booths listening to their favourites, that was until the store manager realised that they had no intention of buying a copy and threw them out.

The money raised came from the entrance fee plus the sale of refreshments, made by the committee members' wives, which were sold from the little room at the side of the stage. This was a community all coming together enabling to raise the funds necessary for the lads to participate in games in Holland.

As for playing the records, Frank Cousins and Brian Shaw were always at the forefront. The other players volunteered (army fashion) but to their relief Frank and Brian were in command. After all some of the lads fancied spinning discs but others kept their distance, perhaps preferring to be on the Dance Floor showcasing the sartorial catastrophes of the day.

The wouldbe DJ's would stack the 45rpm records in the order they were going to play them. Certain lads and gals sometimes came up with a request. It was soon realised that the same lads were coming up regularly and looking through the records then putting them down on the floor near the stage curtains and hands were coming under the curtain to pinch them.

The records were soon dwindling and fortunately Ivor Ekrem soon got on the case and rounded them all up again. He was a man not to be messed with.
It’s not known what he said to the lads responsible but it never happened again.

The above picture shows the state of the building today, a place where lads and girls had their first date.

As for the football, Clifton All Whites maintained their lead in both the Intermediate and Junior Divisions of the Young Elizabethan

This is part 14 of the player’s history. All other parts can be found in the Information section at the top of the homepage.

Next week The Clifton Boxing Club Tournaments at the YMCA