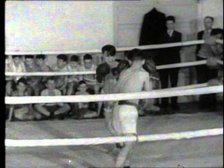 Clifton All Whites - The Players Story 15 of 24

With the discos at Holy Trinity church now weekly and the fund raising for the trip to Holland, the Clifton Boxing Club had a tournament coming up at the Clifton YMCA on Green Lane.

They offered to share the event so that the Clifton All Whites team could fund raise at the event. Mick Varley was the ABA British Welterweight Champion. This was a club with great pedigree. Dave Kennerdale was always the last on the bill with a great knockout punch that could guarantee the night finished off with a bang. Like all boxing nights at the YMCA, it was a full house, all tickets were sold.

The ring was set up in the middle of the gym with the seating around all 4 sides of the ring. As guests of honour, the All Whites lads had front row seats on the eastern side of the ring. They had never been to the boxing before and the atmosphere was a bit overwhelming, after all these lads were so young.

The first boxers enter the ring, the bell rings and with the first punch it lands on the other lads chin, he drops to the floor like a bag of spuds and he’s ‘Sparko’ totally gone. The All Whites lads are astonished, “Is he dead”, shouts one of the boys. As it was he comes around and he’s ok.

As for the football the Church League under 13s team were running away with the league, winning all 5 games scoring 46 games and conceding just 2.

In the Junior league (Under 12s); this was the time when the two strongest teams finally got to play each other

This Junior Division local derby between these top of the table teams drew quite a crowd and credit must go to all the boys for the sporting manner for which they conducted themselves.

In their first attack Athletic went ahead with a great goal, Martin Davey hitting the ball first time on the run.

Hobbs, Blatherwick and Watts were playing very well in keeping All Whites forwards of Robertson, Cotterill and Ekrem at bay.

Then Athletic went further ahead through Perkins. At 2-0 down Ekrem for All Whites had a great chance but shot straight at Chawner. All Whites looked very dangerous until they got to the edge of the penalty area.

R Limb broke up attack after attack but All Whites were unlucky when Gualini twice hit the post.

Clifton had a fairly easy task in reaching the second round of the Bower Shield.

The All Whites Lads were really into their Footballing Equipment. It wasn’t just Fashion but more Performance Driven and they we wanted the Best on offer! Foam-backed Shinpads and Black Laces appeared. Their moulded multi-studded Boots would soon give way to the new Screw-in Stud Types. The Mouldeds would make a comeback however when the lads quickly realised that both types of Stud were required in the Modern Game.

Where did all this “new kit” come from? Well they weren’t exactly spoilt for choice. Redmayn & Todd and Gunn & Moore, both on Carrington Street, were the major suppliers along with the lower profile Suggs on King St. and Mercury Sports on Alfreton Road.

Highbury Vale had now taken the lead at the top of the table.

Silverdale tried hard but were reduced to 10 men for the second half as Paul Hills had to retire injured. He was a player that a lot of the All Whites players respected. When the going got tough he would be in the middle of it. He was the amateur version of ‘Chopper Harris of Chelsea and the following season he would become an All Whites player.

This match was not as one sided as the score suggests, for All Whites obtained their goal in fast breakaways.

Most of New Clifton’s attacks were broken up by Holder, who despite an injury still proved to be the best player on the park.