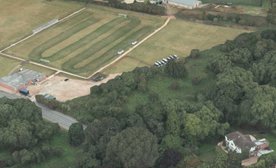 Clifton All Whites - The Players Story 18 of 24

The big match for the weekend was the game to be played between the two big Clifton teams in the Under 12 Junior section at Farnborough Fields.

This local Derby turned out to be a real classic, with both teams delighting their supporters with some really exciting Football and it was hard to realise these players were all under 12 years of age.

From the start All Whites through Clieto Gualini, Ian Robertson and Anthony Moseley made a nice move down the wing, but Ronnie Hobbs and Brendan Hopkins nipped this attack in the bud and then set their own forwards going. Pete Russell showing a fine burst of speed in evading a tackle by Tim Clements slipped a fine pass to Martin Davey who sent in a terrific shot on the run which was only inches off target.

With the wind at their backs Athletic were exerting all the pressure with shots by Tansley, Watts and Camm literally taking the paint off the Woodwork. All Whites defence of Michael Dilnot, Mick Brown, Steve Holland, Tim Clements and Graham Huggett were great at this period in preventing Athletic from scoring.

Then Neil Blatherwick brilliantly weaved his way goalwards and sent in a scorcher which produced an equally brilliant save from Michael Dilnot. From his clearance Pete Cotterill, Nobby Ekrem and Marshall combined cleverly to threaten Athletic’s goal, but Brooks anticipated the pass and cleared his lines.

Shortly before the interval Athletic took a deserved lead with a good goal. After a fine run, Athletic’s winger, Tansley slipped a pass to Blatherwick who then lobbed a ball over the All Whites defenders to Pete Russell who netted.

The second half began in a Cup Tie atmosphere, the question being could Athletic hold on to their one goal lead against the wind? All Whites were now giving the ball plenty of air with passes directed to their star forward Clieto Gualini, but he was well contained by Robert Limb who repeatedly came out with the ball and together with Robert Watts proved a real rock for Athletic.

Goalkeeper Chawner was deceived by the speed of an equalising shot from the wing. This was a great pity this as Chawner had played so well. This goal certainly shook Athletic, but with Captain Ronnie Hobbs urging his team on they took full control of the game for the final 10 minutes.

Camm working like a Trojan put a perfect pass to Tansley, who let go with a real pile driver that had goal written all over it, however, Michael Dilnot, once again, produced another brilliantly save to keep the score level.

This result means that Athletic are still the only unbeaten team in the Elizabethan league and it is hard to see how they will lose this record.

Mr Harrison, who refereed the game so well, congratulated all 22 boys for their high degree of Football prowess and the Sportsmanship displayed throughout the game.

Although All Whites topped their century of goals in the Elizabethan League before Christmas this was not to prove an easy game. Dick Lambert had another “Kit Faux Par” and had forgotten to pack the Team’s Shorts. Playing in “Trousers for Shorts” the U14's managed to score 9 Goals, with no reply, in this Misty afternoon encounter at Colwick Woods.

The Team with the help of their parents are now busy preparing to raise over £200 to enable to make the Continental trip. They had come up with the idea of a Jumble Sale and Teams of Players were despatched to all corners of Clifton to knock on doors for any item that could be sold up at the Holy Trinity Church on a Saturday morning to help raise funds for the trip.

All items collected were to go down to Dick Lambert’s Garage on Thistledown Road and sorted by the Player’s Mothers. Unfortunately some of the items were rubbish and the lads were struggling to obtain decent sellable items.

That was until someone had the idea to try the large detached houses on the hill to Ruddington and down to the Railway Station which had closed 20 months earlier due to the Beeching Cuts!

It was here they found some of the greatest items that were to raise much needed funds. A pair of the latest Bobby Charlton Boots were donated along with many other useful items.

Just two months before one of the greatest footballers in English history had died. This was a real football legend and he lived just 50 yards from the club. He lived just over the brook in the nearest house to the gates of the not yet built All Whites ground on Green Lane.

William Henry Walker (29 October 1897 – 28 November 1964) was a prominent English footballer of the 1920s and 1930s. He is considered by many to be the greatest footballer to ever play for Aston Villa Football Club and one of the greatest players to have played for England. As a manager he won the FA Cup with each of Sheffield Wednesday and Nottingham Forest.

He managed Nottingham Forest from 1939 to 1960, bringing promotion to the First Division in 1956–57 and an FA Cup final triumph two years later (beating former team Aston Villa in the semi-finals), becoming the only manager to win the trophy both before and after the Second World War He was also the first Englishman to score at Wembley, when he scored against Scotland on 12 April 1924. He died in November 1964, four years after retiring as Nottingham Forest manager.