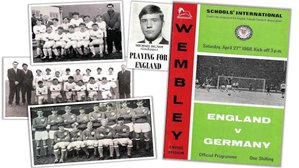 Clifton All Whites - The Players Story 19 of 24

The picture above shows another of the legendary All Whites players. Michael Dilnot whose outstanding Semi-Final performance helped Clifton All Whites through to the 1964/65 Final of the Tommy Lawton Cup at Meadow Lane. At this time he was at Nottingham Forest on Schoolboy Forms and would sign Apprentice Forms for 1968/69. He was our first International although recognition of his achievement has been somewhat overlooked by the Club. He played in goal for England Schoolboys against the West German Schoolboys Team at Wembley Stadium on 27th April 1968.

There were other players who had made it into the Nottingham Forest Youth team as well as Michael Dilnot. Graham Collier had signed forms as well as Dick Shipley and Paddy Byrne

The Jumble Sales had been a great success and with the Discos were to prove a source of vital income.
As the season went on Clifton Athletic were taking no prisoners in their quest to become Champions of the Junior League

The score in this match reflected the two teams present league positions. Beechdale were full of enthusiasm, lacked game experience whereas Athletic were the finished article as displayed by winger Tansley who scored 6 of the visitors 10 goals.

45th BB Company has withdrawn from the League due to Player problems.

New Clifton soon took the lead and continued to get goals at regular intervals. The score would have been much higher if it was not for the heroics of the Morley goalkeeper.

In the second half New Clifton concentrated more on midfield play with Morley breaking away to score a solitary goal. At the final whistle New Clifton applauded Morley off the pitch for their valiant efforts. Langham, Bingham and Hare put in sterling work for Morley, whilst Battersby, Briggs, Lees and Rudge were outstanding for New Clifton.

It was decided that The Final of the Intermediate Cup will be played at The Harvey Hadden Stadium on April 10th. Clifton All Whites were handed a Walkover due to the 45th BB Company’s withdrawal from both the Cup and League Competitions

Readford Sports caused the shock of the day by beating strong favourites Clifton Athletic to tee up a Semi-final game against Clifton All Whites.

In the Church League All Whites scored 42 goals in just 3 games and were romping away with the league. Over the last couple of weeks they had beaten Kingswood Meths by 15 goals to nil followed by a 17-1 victory against Nottingham St Marys

February 20 at home to Hucknall St Johns they had another high scoring game with a 10-2 victory.

All Whites reached the final of the Tommy Lawton Cup for the second successive time, but in spite of the score line it was mainly down to the goalkeeping by Dilnot that held up a lively Readford attack at Carlton Road.

The final will be held at Notts County’s Meadow Lane ground on March 20 when All Whites meet Bulwell Hall Colts.

Against Readford Sports, All Whites took the lead through Centre Forward Gualini. Moseley added the second goal from Holland’s through Ball.

Readford battled hard against a stubborn all Whites defence, but went further behind when inside right Ekram netted the third All Whites goal. Gualini rounding off the proceedings with the fourth goal four minutes from the end.