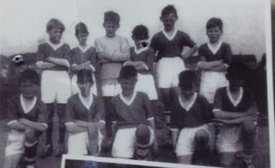 Clifton All Whites - The Players Story 2 of 24

The first winners of the Young Elizabethan Football league in the 1962/63 season were Clifton Athletic Youth Club. That first season saw them do the double as they won both the Senior and Intermediate League. Add to this the Intermediate Knockout Trophy and the N.A.B.C Cup.

The team were founded in 1959. Their first base was an old hut on Lanthwaite Road. The original Youth Club was to the South of Bob Sherwin's Garage. The site occupied now by the Estate Agents and the Fast food outlet. The original low stone wall is still there. The team in the first season of the Young Elizabethan League consisted of a mixture of Clifton Youth and the YMCA team.

On the books of Notts County were Crofts, Walker and Woolley. Bob Woolley from the Tintagel Green area started as a Centre Forward but secured first team recognition at Meadow Lane as a winger. He played 9 times, scoring 2 goals as a professional. Now deceased he later went on the All Whites first tour to Holland

Their second season saw the team strengthen their squad with the signing of Graham Deakin, later to become a regular in the All Whites debut season in the 1973/74 Midland League.

They were to become great rivals of Clifton All Whites.

The Community spirit on the Estate was second to none. As well as football there was a thriving boxing community. At the same time they were to build their own 2000 pound gymnasium just around the corner in what is now the Morrisons loading bay. Every body is getting stuck in including star Welterweight Mick Varley

All 32 members including Schools Champion Glen Norris had been using a room in a house on Tilsbury . Close, Clifton as temporary training headquarters.

September 62 saw the foundation plaque laid for the building of the YMCA building on Green Lane and at a cost of 52000 pounds. it was to open at the beginning of the 1963/64 football season and was the venue of some great boxing tournaments in the next year. Talk to the old folk and they would tell you of the packed out nights of the Swinscoes, the Polaks and of Dave Kennerdale, the great Uncle of todays coaching staff member Nicky. His fights never went the distance as many a boxer who kissed the floor can admit to.

Back to the football and the new season was fast approaching and a new team was being formed around the Thistledown Road area of Clifton. The players in the photograph above were the original Thistledown Rovers team who played in Green Shirts with a White trim

These lads all went to Highbank school who at the time were top of the schools league. They all came from the catchment area and ages varied from 8 years of age to 11. With the team came the backing of their parents who became legends of the club in their own rights .

Andrew Norwell of Conifer Crescent was one of the original team and his father Bill became the manager. Dick Lambert, father of Stephen got involved and soon Ivor Ekrem who lived round the corner on Breckswood was there to help from the beginning. His son Robert Ekrem, although two years younger, was there at the start

The word spread like wildfire, along Southchurch Drive down to Blessed Robert School where Terry Moseley and Andy Wray were among the first to sign on. Word got around the school and a very young talented keeper in Michael Dilnot was there on the playground gossip

Highbank school at the time had had a cracking summer of cricket. Eddie Lambley was there from the beginning. He saw the talents first hand of two of his team mates in Steve Holder and Kevin Flynn. They were also tasty footballers.

Both of Havenwood Rise they should have gone to Whitegate School but probably due to class numbers being oversubscribed they were sent to Highbank instead to that schools advantage.