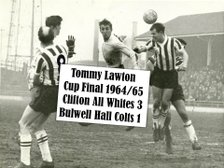 Clifton All Whites - The Players Story 20 of 24

Athletic went into the attack right from the start and after near misses by Camm, Bradshaw and Neil Blatherwick, Tansley sent over a grand centre and Ronnie Hobbs made no mistake with a great header.

Readford threatened to equalise a couple of times, but Bob Limb repeatedly broke up these attacks. Robert Watts tried hard to get his forwards on the move, but the heavy going was against him. Brendan Hopkins, Bob Limb, Martin Davey and Brooks were outstanding in defence.

Dynamoes were very unlucky not to share the points, having most of the play and with a confident penalty appeal turned down when Pete Dexter was heavily brought down. Playing conditions on a bad pitch were all against good soccer, but Dynamoes surprised their supporters with some good intelligent stuff.

Phoenix kicking downhill were soon a goal in front but Ronnie Terry put Dynamoes level with a good goal after good work by Russell. Phoenix grabbed the winner when a harmless looking lob went in off the post.

Outstanding were Wragg, Dickens and Blake whilst it was very good to see Stephen Ward fulfilling earlier promise by playing a blinder.

For the 2nd year running the Under 12 Junior All Whites team found themselves in the final of the Tommy Lawton Cup at Meadow Lane. This was to be played after the Notts County home game against Rochdale which finished in a dour 0-0 draw on a quagmire of a pitch that had cut up badly

After the team were cheated out of the Cup Final the season before due to Phoenix Athletic playing overaged players, was this to be the year when the All Whites club were to pick up their first honours

The players in this Tommy Lawton Cup Final were under the age of 12 years of age and its astonishing how some of the small ones even contrived to move the ball on a Meadow Lane pith which bogged down fourth division professionals earlier.

All Whites won with a hat trick of goals netted by inside ford Gualini ten minutes from the end after Bulwell had gone ahead through inside left Smyth in the fifth minute.

All Whites goal was under pressure with Dilnot making theres fine saves, one was a full length drive across the goal, another from a shot from Pope and the third by throwing himself at the feet of Tyler.

Colts continued to attack before half time but missed many chances, as they should have had more goals fro their fine first half performance.

Full marks to full backs Whitehead and Brown and centre half Huggett who worked so hard under pressure.

All Whites wing halves Clements and Cotterill came into the game more in the second half, but the Colts were more dangerous in attack, and it wasn’t until the final 10 minutes with the hard work of Nobby Ekrem who made an opening for Clieto Gualini who shook off two defenders to shoot from an impossible angle into the net.

Basically Clieto scored on the run from the Goal Line outboard of the left Goalpost at the Meadow Lane end. He was an exquisite Player with a sweet Left Foot. Only he could have squeezed it in from there! This Goal knocked the stuffing out of Bulwell.
Before the excitement had died down Clieto Gualini raced through the middle again and from a rebound flashed the ball into the net. Now All Whites were really on top. The Colts goalkeeper made some really good saves near the end but could not prevent Clieto Gualini getting his hat trick.

The boys received their Cup and winning plaques from Mr C Heath,Secretary of Notts County who congatulated all of them for a fine performance under such terrible conditions.