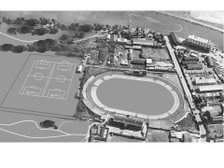 Clifton All Whites - The Players Story 21 of 24

Part 21 Under 14’s through to the Bower Shield Final & Peter Shilton’s Trial!

The Young Elizabethan League Committee decided that the Semi-Final Games were to be played, at the same time, on adjacent Pitches.

The venue was the Monte Hind BC Sports Ground, just off Trent Lane and in the shadow of the original Nottingham Dog Track. The adjacent Pitch layouts enabled a large vociferous Crowd to assemble in the gap between the two adjacent touchlines.

Highbury were beating Readford and at one point, as Iain Walsh was collecting the Match Ball for a throw-in on the “Crowd Side”, a Readford Player crashed a Volley against the Highbury Crossbar only to see it bounce to safety! As Iain’s Dad handed him the Match Ball back he noticed Iain’s dismay that Readford hadn’t scored against our Rivals. After all there was no Love lost between the Clifton Lads and Highbury Vale! Iain’s Dad recognised his dismay but countered “you don’t want Readford to Win” .…to which Ivor Ekrem added “They’re Bigger, Better and Stronger than Highbury! ….You stand a better chance of beating Highbury in the Final!” ….a lesson learnt from two Wise Heads that Day!

Back in the Dressing Room, after the Semi-Final victory, Dick Lambert started to float around, as it were, speaking individually to the Players. However he wasn’t congratulating them on their Semi-Final performances! He was looking for volunteers to play in a Friendly Match he had arranged for the following day. Luckily for Dick a team was cobbled together! It consisted of volunteers from the U14’s plus some of the U13 Squad, who had been spectators at the Semi-Final and just happened to be in the Dressing Room at the time. So we had a Team but we didn't know who or where we were playing.

The following day we set off and after a while we knew we were in Leicester and eventually ended up in Blaby. They had an impressive Clubhouse and Ground with 2 pitches and Training areas. [All of these design cues would later be used at the All Whites Ground some six years in the future!].

We lined up against Blaby in their All Blue kit. After playing for 20mins and with the score at 0-0 they all of a sudden wanted to change the Goalie ....No subs in those days ....but it was "a friendly”!

At this point Eddie Lambley noticed a familiar figure on the touchline ….it was Gordon Banks and no doubt he had come to check-out the new Goalie!

The All Whites Management, as usual, hadn’t told us the status of the Team we would be playing and Blaby were Slick and Confident and were shocked to find themselves, complete with their new goalie, 0-2 down at the interval.

However the game ended 2-2.

Blaby’s replacement Goalkeeper that day turned out to be a certain Peter Shilton!

…..Lucky lad Peter having the privilege of playing against All Whites that day! ….and if anything we thought the First Blaby Goalie was better!

A week later Athletic were going all out to win the Under 12 Championship outright.

Conditions were all against good football, but both teams put on a brave show, the deciding factor being the strength and size of the Athletec side.

It was a case of a good big side beating a good small side., and make no mistake this Athletic side is a good one, with a blend of skill, strength and speed.

In the opening exchanges , New Clifton made a nice move down the left wing, but Limb and Hopkins Cleared their lines and sent Perkins away down the right. His pass left Watkins clear and his shot was deflected into the net.

Tansley then scored with a terrific shot on the turn. This was followed by the best goal of the match, Tansley sent in a perfect corner kick and Martin Davey sent in a header which rocketed in the net.

New Clifton made a couple of nice attacks but were just too small and got bogged down in the mud.

Players of note for New Clifton were Warmly, Black, Anderson and Greenery. Brooks, Limb, Davey and Hobbs were Among those who did well for Athletic.