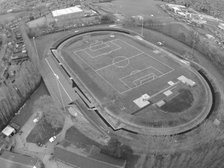 Clifton All Whites - The Players Story 22 of 24

After the semi finals at the Monte Hind Boys Club, the Under 14s were to meet up in an away game against their Ken Bower Cup Final rivals Highbury Vale

The Away Game was to be played at St. Albans, Bulwell v Highbury Vale BC....enroute a huge traffic jam on the Ring Road ....there we were on the Coach stuck in traffic on the approach to the Dunkirk Roundabout [ no Flyover till 1968 & Replaced by a Dual Carriageway version in 1989]. Due to torrential rain traffic was going at a snail pace. As we approached the Ring Road/Derby Road Traffic Lighted Crossroads [no Underpass till 1989] the word goes out ....get changed on the Coach! We arrive fully kitted at St. Albans ....but we are not playing on the Pitch we've previously played on in School games against the William Sharp School Team. No this is a lesser Pitch sloping end to end with hardly any grass in the Penalty Boxes. They are a Quagmire ...not of Mud and Sand but Mud and Coal Slack!
At the kick-off it was cold, overcast and raining and these conditions continued throughout this very competitive Match. Eddie Young won the toss so All Whites played downhill in the first half ....Iain Walsh recalls a overhead clearance out of the Penalty Box in the first 10 minutes.....splat in the Slack ....this cold sticky black mass stuck to the back of his Shirt and Shorts for the remainder of the game! ....At Halftime All Whites go in 0-1 in front. Vernon Rogers scoring from close range after Highbury failed to clear a Corner kick.
Although 0-1 down Highbury fancied their chances downhill in the Second Half!
Sure enough Highbury piled on the pressure but All Whites were ready for this and were resolute in Defence and, as a Team, played some fine football which enabled them to seize the initiative, from the Home Team, even though they were playing uphill.
Some fine interplay by Steve Holder and Kevin Flynn set up Frank Cousins to score All Whites second Goal with a fine Diagonal shot from the edge of the Box.
These younger members of the Team deserve praise for their performance in extreme conditions in such a high pressure game!
Being 0-2 up against their Rivals the All Whites Lads weren’t in the mood to let this one go and saw the Game out!
Highbury Vale BC 0-2 Clifton All Whites

Clifton All Whites 2 Highbury Vale BC 1

All Whites the Young Elizabethan team of Under 14s are ending a successful season on a strong note, and fought all the way to win this Bower Shield final game at Harvey Hadden Stadium.

As the lads arrived at the ground a couple of them had visions that this was the nearest they would get to playing at Wembley. That was until they reached the changing rooms. Bench seats all round the walls with a 4 inch mesh from floor to ceiling running right down the middle of the room with bench seating either side of the wire. Clifton on one side and Highbury on the other. Highbury were not noted for being the quietest of teams and to sit next to the wire when getting changed really set the scene with the opposition attempting to wind up the team.

This augers well for their forthcoming tournament in Holland at Whitsun. The issue was in doubt up to the final whistle, for Highbury aided with the wind, gave the All Whites defence many anxious moments early on.

Highbury took the lead with a goal from a corner. The ball bounces in the six yard box, and an opposition player shins it wrong footing the defence. They are Cock-a-hoop ...It’s the first Goal they’ve scored against the All Whites and you’d think they’ve won the Cup! …..but we know we're better than them!

With the movements of Flynn and Cousins All Whites fought back desperately and the latter narrowly missed in a goalmouth tussle.

Centre Half Young, well supported by full backs Walsh and Boulter did very well and behind them goalkeeper Holloway made one smart save at the expense of the Highbury Centre Forward.

With wing halves Holder and Shaw prompting their forwards, the All Whites came more into the game in the second half, and after 10 minuses Moseley nipped in to equalise with a well earned goal.

All Whites went all out for the winner, Wilkinson , the Highbury goalkeeper, making two thrilling saves from Centre Forward Rogers. All through The Second Half The Highbury Goalie ....Gary Wilkinson had been leaving the Penalty Box Ball in Hand whilst making  clearances ....now doubt he'd been doing it in the first half too! ...However Mick Fisher's Grandad had spotted this in the Second Half and pointed it out to the Linesman. The Linesman took note and the next time Gary vacated the Box Ball in hand the Linesman's Flag went up!

The winning goal proved a spectacular one. The Direct free kick was given just outside the Box. Playing at Left Back Yanny Walsh had no idea as to why the Free Kick had been given however prompted by his dad who told him to get up there and take the Free Kick as he was one of the Players with a good chipping technique. Iain chipped the ball in the direction of Vernon Rogers as he was our tallest player ...the Ball however cleared him and the next thing he knew the Ball nearly ripped the Roof of the Net off. Mick Fisher latched onto the loose ball in the six yard box and Rifled it into the Roof of the Net!    I can still see it to this Day! ....It was 5 foot higher than the Bar before it stopped rising! Score 2-1 ...and we do the Double!