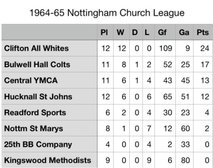 Clifton All Whites - The Players Story 23 of 24

The Cup Semi-Final matched Clifton AW with Readford Sports at Woodview, the neutral ground of Parliament St Meths. All Whites conceded a goal in the first minute of the Match through an own goal.

The team fought back to lead 2-1 at half time, Frank Cousins scoring the second just before the break. In the second half Eddie Lambley scored three goals to wrap up a 5-1 win and put them through to the Cup-Final against Bulwell Hall Colts.

Ivor Ekrem asked the lads to play a joke on Dick Lambert and to leave the Minibus with a sad look on their faces, which they did and didn’t reply when Dick Lambert asked how they had gone on. He took this as we had lost and changed from a smiling face to a disappointed face. Ivor explained that we had conceded in the first minute and then the team all at once shouted “and then we scored five goals and won”. It just showed how much Dick Lambert cared about his team winning.

Clifton Athletic were well below form for this one, but were still too good for a game Thistledown, who tried hard all the way. Athletic had to win this final game of the season to finish top of the Young Elizabethan league, with All Whites second with an inferior goal average.

As goal average does not count in this League, the play off between Clifton Athletic and Clifton All Whites will take place next Sunday 25th April 1965 with a 10.45 kick off at Farnborough Road Playing Fields.

As for the game it was obvious that due to the very strong wind, good soccer was out of the question. Both teams played it hard and strong. In the opening minutes, Daft sent in a strong shot which Chawner did well to save. Thistledown were pressing hard, but Hopkins and Brooks held them at bay.

Hobbs cleared his lines cleverly to put Tansley away to put Athletic ahead. This was followed by a goal from the irresistible Blatherwick. Then a long clearance by Thistledown had Athletics defence flat footed and Korol scored to put Thistledown back in the game.

A move between Watts and Bradshaw sent Davey away to make the score 3-1.

The second half was fought out as hard as ever, but with Robert Limb putting the shutters up, Thistledown rarely got near to Athletic’s goal. Stevie Camm having an unusually quiet game suddenly sprang into life with a great pass to Blatherwick, who rounded two defenders before firing in a real pile driver and Athletic were home and dry.

A really creditable performance by these youngsters in their first Season together to finish at the Head of the League.

This game was spoilt by a strong wind, but nevertheless there were some good moments and occasional flashes of good soccer.

The highlight of the game was when a Bulwell forward hit a real cracker, and with the wind behind it, the ball fairly rocketed towards the net, then up popped Charlie Blake to head away a ball that could have felled an Ox.

Anyone spotting an 11 year old without a neck on the Estate that will be Charlie. Dynamoes could well have shared this one but fell over when within shooting range. It was more a case of end of the season blues, although Radford, Barratt and Russell tried hard to install some life into the game, it was a pretty hopeless task, especially with the strong prevailing bitter wind.

Clifton All Whites Under 13s completed the Double in the Nottingham Church League by winning the Woodward KO Cup.

The Cup-Final was once again an Evening Kick-off held at Woodview. The ground where Clifton AW had lost 0-3 in the 1963/64 Season. Their opponents were Bulwell Hall Colts. A side that Clifton AW had beaten 6-0 and 10-0 in the League, but these were the only Matches they’d lost during the Season. At the Kick-off it was overcast and wet, almost Thunderstorm dark. From the start it was obvious that the Bulwell team had been training hard for this match and their Manager decided that he would use two players to mark Eddie Lambley, who had scored 8 goals against them in the previous two matches – it turned out to be the correct tactic as it made for a tighter game, but they let him get away on one occasion and he scored the opening goal from the edge of the area. The only problem with this tactic was that there were other really good players in the Clifton AW team! Frank Cousins quickly added the second Goal.

All Whites monopolised the attacking in the second half and Colts were further in arrears as Kevin Flynn slotted the third. Pope replied for Bulwell giving Dilnot no chance but All Whites replied with further goals by Cousins and Wilson making the score 5-1*.

A proud Captain, Eddie Lambley, went up to collect the Cup at his third attempt in an All Whites kit!

* All Whites won a corner on the left at the top end of the pitch. As Ian Wilson prepared to take an in-swinger a Parliament St Ground Official replaced Tan coloured Match Ball with a mainly White Ball with Tan Panels, which at the time was probably better because of the poor light conditions. Ian scored direct from the corner. The Ref gave the Goal, however the Bulwell Supporters went “Banana's” demanding the "Goal" was struck off because the Official Tan Ball was not used!

After giving it some thought the Ref capitulated and the said "Goal" was expunged! So the All Whites only scored 5 goals although it really should have been 6!