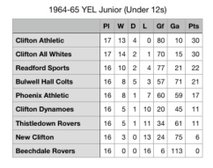 Clifton All Whites - The Players Story 24 of 24

This match betweenen two lowly placed teams surprised everyone by the high standard of soccer played. There were many really fine individual performances.

The highlight of the game was a penalty taken by Thistledowns Price, a really hard low shot, that goalkeeper Derek Wragg made a bailout save to push the ball away..

Outstanding for Thistledown were Cuthbert, Price, Lambert and Norwell. A really grand finish to the season.

Other end of season results

This Young Elizabethan League play off game was watched by around 200 people, who saw boys football at its best, and it was hard to realise that these boys were all Under 12s. Both teams turnout was immaculate and a credit to the league.

Although the championship was at stake in this local derby, it was played hard and keen, with the sportsmanship 100% on both sides.

As for the match itself, it was really brilliant with one side attacking , then the other, and although Athletic had more scoring chances, they were guilty of missing more efforts at the goal.

Individually it would be hard to pick out any one player as being outstanding, going through the teams they all deserve credit. For Athletic Chawner had an unusually busy morning, but really acquitted himself well, with Hopkins and Brooks both efficient and effective.

Ronnie Hobbs playing a real captains game, was nothing short of brilliant, and R Limb was easily the strongest defender on view and the mainstay in defence.
Watts was always working well while Blatherwick never knew when he was beaten. Stevie Camm with being prominent was always up with play.

M Davey was thrusting all the time and was on the spot to score Athletics goal, with Bradshaw playing his best game ever.

For All Whites Dilnot time and again saved the day with brilliant saves. Whitehead and Brown had a busy day but coped very well. Cotterill had a great game both in defence and attack.

Huggett came out evens with his duel with Davey and Holland was quietly effective. Moseley and Marshall formed a great right wing partnership with Marshall netting All Whites equaliser.

Robert Ekrem had a great game at centre forward and against any other defender than Limb would have had a field day.

Robertson linked up well with Gualini, a big strong boy who laid on the pass for Marshalls goal. Truly a magnificent game enjoyed by players and onlookers and well refereed by Mr Waldron.

Because the score was a draw both teams shared the Championship

This has been a great season for Clifton All Whites. Their Under 14s have won the Young Elizabethan Championship and the Bower Shield Knock Out Cup at Harvey Hadden Stadium. The Under 12s are equal points champions with Clifton Athletic in their league. They are also the Tommy Lawton Cup winners at Meadow Lane. The Under 13s are Nottingham Church League Champions and Woodward Knock Out Cup Winners.

Credit must be given to the Clifton Officials and helpers. Mr Bill Norwell (Treasurer) of 84 Conifer Crescent: Mr I Ekrem of 36 Breckswood: Mr Flynn: Mr A Moseley; Mr Cousins; and President of the Club Mr Albert Fletcher.
Secretary is Mr D Lambert of 47 Thistledown Road