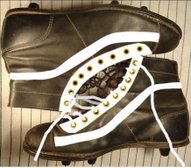 Clifton All Whites - The Players Story 3 of 24

3. Part 3 - What came first the Chicken or the Egg

The Summer of 63 was the start of the second season of the Young Elizabethan League. Clifton Athletic who played down at Gresham fields were the team to beat. The first season in the league 1962 had seen both ‘A’ and ‘B’teams win the Senior (Under 14s) and Intermediate (Under 12s) leagues respectively.

Many stories have got round of how Clifton All Whites were formed, were Thistledown Rovers already playing, had they played the season before. With the help of 5 of the original players, hopefully this is the correct version

Although Cricket season was on the go, Football still came first. Word had got around that Thistledown Rovers were forming a side. All these lads were in the "catchment area" as most of them lived on Thistledown Road very close to Dick Lambert's house, and some of them on streets just off - they would have hung about with each other after school and during school holidays. They played football on the roads and any bit of wasteland. There was varying ages, a few of the lads were the same age and the rest a year or two younger. The photo from last week shows the first Thistledown Rovers team formed

Word had spread like wildfire further afield down to Blessed Robert School and also to Whitegate. Dick Lamberts son Steven was a player in the team and his father was now involved. Friends were beginning to bring mates along to sign. There was now enough players to form two teams and to avoid disappointment to the many who were showing interest Dick and Andrew Norwells dad, Bill, decided a second Clifton Under 12 side was required.

Bill Norwell who lived around the corner on Conifer Crescent became the manager of Thistledown Rovers and Dick Lambert the manager of Clifton. Dicks wife Audrey was to make the first ever kit for the newly formed second team all of white material, shorts and socks to match, the opposite to Bills team Thistledown who were to wear Green shirts with a white trim.

Rumour had it that the All Whites shirts made by Audrey Lambert were made out of white tea towels.Once the kit was made and shown to the lads there was a discussion of what the team should be called and by unanimous decision, because of the colours, they became known as Clifton All Whites. By the start of the Church League in that first season the team had a brand new Umbro kit of White Shirts with a green trim, the opposite to Thistledown Rovers. Possibly Alf Mosley, father of Terry, was the man responsible for that as he had found a sponsor who was prepared to buy complete new kit for the team.

At the time in the Midland Amateur Alliance league there was a team called Derby All Blacks, who for some reason had a report in the West Bridgford & Clifton Standard newspaper every week, whether this had any influence on the name All Whites was another theory.

Players registered to play and were charged half a crown to sign on. As some players were still 2 years younger than others, it was decided to split the players to make what was thought two equal teams of varied ages.
Andrew Norwell, Bills son was selected for All Whites and Steven Lambert, Dicks son was to play for Rovers.

Other players to play in that first season, although not sure for which team were Alan Kirby, Terry Mosley and Alan Newman, although older ( later in the season played in the Church League Under 13s team)

The teams were formed and Clifton Athletic, the Champions now being older were now playing in the Under 14 Senior league. Thistledown Rovers and Clifton All Whites were both down to play in the Young Elizabethan Junior Division Under 12s league, consisting on 6 teams, Phoenix Athletic from Gedling and five of which were all from Clifton.

Before the league season started All Whites arranged a friendly game against New Clifton to be played on the Swansdowne Road pitch. All the lads had been out to buy the latest styles of St Crispan Wings football boots (just like the ones above) and to top it off they had to knock in the studs with their dads hammers

Next week we give the score, the first ever captain and first ever goalscorer for the club. Add to this several original match reports and the player who missed the boat and was refused from signing on. Seasons later he signed a professional contract for Notts County

Was you a player from the era who has stories to add, please get in touch. This is part 3 of the early days and will be added to the Information section at the top of the homepage coming every Monday the first season for the teams in the 1963/64 season.