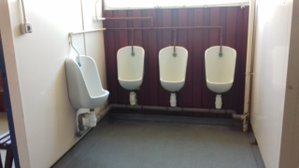 Clifton All Whites - The Players Story 6 of 24

The signing of Holder and Flynn certainly strengthened the Rovers team.

Thistledown Rovers scored their first win of the season - after drawing their previous games - by beating New Clifton.

Credit must be given to the Rovers half back line, Holder, Holloway and Hopkins who had firm control of the game throughout.

Holder was the outstanding player on the field with his energy and strong tackling and he was always supporting his forwards putting the ball through for them to run on to.

Thistledown opened the scoring in the second minute from outside left Holland followed by another five minutes later. In the second half, Holland went in goal with keeper Page taking up the outside left position. Dilnot the regular keeper had suddenly taken ill before the start of the match.

The Rovers continued to do the pressing in the second half and further goals came from Page and outside right Brown. In the closing minutes New Clifton broke away and Holder trying to clear the ball handled it.

As for the Farnborough Fields urinals picture at the top of the page, a little incident happened in one of the All Whites home games. As explained by one of the players.

“The team had varying ages in the team, there were 11-year-olds, 10-year-olds, 9-year olds and one 8-year old. As you can imagine the 8-year old looked small but a nice lad and a willing footballer. In this first season, every player got their chance to play.”

“His mam had obviously packed him up to have a wash after the match. At his age he would not know about a shower. He carried a small bag and in it was a new bar of soap and a flannel. One of the lads had come in to the area where the wash basins were on his way into the shower.”

“ There were a few blokes about who had been playing and one of them noticed the lad about to put his soap and flannel into one of the urinals to have his wash - he was possibly looking where the water came from to wet his flannel.”

:The player said something along the lines of 'I wouldn't wash in there if I were you'. I looked round and saw what he was doing and rushed over to guide him to the sink and explain what the urinal was for. After this incident Dick made sure the oldest player was to look after the youngest”

In the Church League a competition All Whites decided to enter because of a shortage of games last years Champions Parliaments St Meths opened their account by playing Kingswood Methodists home and away. In the two games they scored 18 goals with 1 against.

December saw the first official newspaper report of the local derby between the two squads and it seemed clear that Rovers were the stronger of the two squads. The signings of Holder and Flynn seemed to be making a difference.

This local derby between Thistledown Rovers and Clifton All Whites resulted in a comfortable win to Rovers. All Whites did not deserve to go down so heavily for they were fighting all the way, but having to field a weaker side than usual, they suffered their second defeat in succession.

The first goal came from a brilliant run from wing half Holder, who made a perfect cross for Jennings to flick home. The second came from a cross by Flynn to Page who headed in brilliantly to give Strickland no chance at all.

All Whites came back into the attack and Flynn handled in the area with Lambley taking the penalty twice. His retaken penalty saw him shoot wide and this took the fire of the All Whites.

Further goals from Flynn (2), Holland and Brown. For the All Whites credit must go to Marshall, Harrod, Lambley and Jukes who were always trying right to the final whistle.