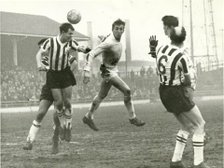 Clifton All Whites - The Players Story 9 of 24

The Young Elizabethan League Junior Knockout Final was played at Meadow Lane under rigorous conditions, nevertheless the boys all under 12 made an excellent showing.

There had been a lot of rain before the main Notts County v Bournemouth & Boscombe game, a match that County lost 3-1. The state of the pitch at the end of this game left the pitch in what could only be described as a quagmire.

Nevertheless the Tommy Lawton Cup Final for Under 12s was allowed to be played and full credit must be given on how these Junior players battled under such horrendous conditions on what can only be described as a mud bath.

The score didn't tell the true story, the team really tried hard. Eddie Lambley had two breakaways where he chipped the ball over the goalkeeper and on both occasions the ball landed on the goal line and stuck in the mud, the first time he started to turn away as he thought the ball was going in, the second time he carried on running but the goalkeeper got to the ball before him. It would have looked a better score line had it been 5-2!!!

After winning 5-0 Phoenix Athletic could claim winning the League and Cup  in their first season. It was also All Whites first season.

Deciding feature of the game was the extra size and strength of Phoenix. Strickland the All Whites goalkeeper played gallantly. Jukes, Burns and Marshall never gave in. For Phoenix. Willy was a giant in defence, known to the All Whites players as big Willy. Young the forward hit 2 of the goals

After beating Nottingham Rangers on Easter Tuesday in a Notts Church League match. Clifton All Whites outplayed Kingswood on the Embankment in the semi final of the Notts Church Cup and cantered to an easy win.

All Whites took Kingswood to task with goals from Moseley (3) and Holder (2) in the first half.

In the second half it was a completely one sided game with further goals coming from Flynn(1), Moseley (2), Perkins and T Holloway.

Much credit goes to the All Whites defence who have only had one goal scored against them all season.

Praise must also go to Left Back Iain Walsh who has improved with every game. It is difficult to understand why he has never been picked for the Nottingham Schools competition.

Clifton All Whites gained an excellent 6-2 win last Friday night over Sherwood Juniors and followed on Saturday afternoon with a 4-1 victory over Argyle St Teresa.

But Argyle surprised with their fighting spirit and on a cannot understand how they have had 56 goals scored against them this season. Bottom of the league Argyle went straight into the attack and gave the All Whites defence one or two anxious moments before Jones their centre forward shot past Dilnot.

All Whites soon recovered from this surprise with a fine goal from outside left Perry with a shot from outside the area.All Whites realised that they had underestimated the strength of Argyle and in the second half with the wind behind them settled down to play some good football.

Flynn gathered a poor clearance and flicked the ball to Perry who shot hard into the net. After this the game became one sided as Argyles defence tired under the pressure of the All Whites attacks. Further goals were scored by Jennings and Page.

The All Whites were once again to meet Parliament St Meths in the Nottingham Church League Cup Final at Woodview on the Meths home ground and the home team had some good players on show on the day.

For the opposition, Keith Buckley, Gareth Lloyd, Frank Cousins and Stan Foster playing at Right Half (later to be the All Whites goalkeeper in the Midland League). Quality players who on the day took the steam out of an out of form All Whites.

The players had to sign their names in a book to prove who they were. Although winning the league All Whites could not get the double.

The return League Fixture at Woodview was the last league game of the season. All Whites came back from 2 goals down to level the score at 2-2 and gain revenge for the Cup Final defeat. Where were their players from that final who had beaten All Whites. A normal league game with All Whites about to take the league Championship and the opposition star players, nowhere to be seen?

2-0 down at the interval and All Whites get a corner. Allan Perry takes the kick, the ball files across the face of the goalmouth and into the far post netting. A goal straight from a corner.

The score now 2-1 and All Whites are up for the challenge. In the last ten minutes of the game the team get a free kick just inside their own half. Pip Holloway takes the kick, a high looping ball. With the keepers arms flapping , the ball goes through his arms and into the net to bring the scores level at 2-2.

The All Whites had taken 3 points out of 4 from the Leagues title favourites to win the league themselves. Finally to put the icing on the cake, the All Whites took the honours in the Nottingham Church League 5 a side competition.

This gave the club their first ever winning medals, something of which became a regular occurrence in future years to come.