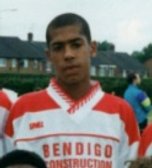 Born in Nottingham, Notts, Francis Green played for Clifton All Whites in the 1995-96 team.
Green moved to Ilkeston Town under the management of Keith Alexander, before going to Peterborough United. He made over 100 appearances for the Posh and scored a total of 14 goals, before linking up with his former Ilkeston boss, Alexander, at Lincoln City in 2003.
He left Lincoln in 2006 to join Boston United, after a loan spell in Spring 2007, at Boston the club suffered a double relegation in 2007 from League Two to the Conference North.
Green then left York Street in June 2007 to join Macclesfield Town on a two-year contract, where he again linked up with Alexander for the third time.
In July 2009, Green joined Conference National side Kettering Town, only to join Oxford United on loan in November 2009. This move was then made permanent in January 2010, though he was released shortly after the club secured promotion to the Football League in May of the same year.