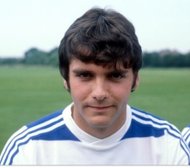 Burke was born in Nottingham, he played in the successful unbeaten All Whites Under 12 side that scored 100 goals before Christmas and went on the score 230 goals for the season. 18 November 1973 saw him score 6 goals in a game against Bestwood Park in the Young Elizabethan league.

He came through the ranks at Nottingham Forest. His only first-team appearance was on 20 October 1976, while still a schoolboy aged 16 years 22 days, as a substitute in the Anglo-Scottish Cup against Ayr United.

He moved on to Second Division club Queens Park Rangers in September 1979 for a fee of £125,000, and made his debut in the Football League on 7 September in a 3–0 win at home to Fulham. He played quite frequently at the beginning of his QPR career, and came on as substitute in the 1982 FA Cup Final replay, which QPR lost to Tottenham Hotspur.

He finished his League career with two seasons at Doncaster, including a loan spell at Stockport County.