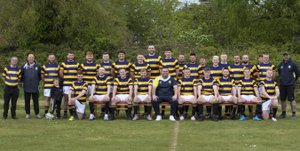 Clock Face Miners NCL side were narrowly defeated 28-22 in a thoroughly entertaining game away at Crosfields.

Clock Face Miners NCL side were narrowly defeated 28-22 in a thoroughly entertaining game away at Crosfields.
Crosfields started the game at full speed and didn’t take long to notch up their first try. Crosfields nine, Jamie Abram, was causing Clock all sorts of problems and the home side were 16-0 up in as many minutes. Fortunately, Clock didn’t crumble and managed to compose the defence. A strong defensive set gave Clock good field position and a neat grubber kick by Brandon Lewis was grounded by Jimmy Jones. Minutes later and Ryan O’Donnell ran a neat line to cut through the Crosfields defence to score 10m in from the posts. Jack Highcock converted both tries. A penalty on the stroke of half time was slotted over by Highcock to close the gap to two points.
Crosfields extended their lead two minutes into the second half with a converted try. However, Clock were still plugging away and were rewarded when a huge Highcock kick was chipped ahead and grounded under the sticks by Karle Hunt. Highcock slotted over the conversion. Clock finally levelled the score when Highcock slotted over a penalty in front of the sticks. With 15 minutes to play Crosfields went six points in front. The game almost ended on a “wide to west” moment when Clock broke the Crosfields line in the final seconds, but the final pass was fumbled.
Clock have the chance to get back to winning ways with a home game against Dewsbury Moor Maroons on Saturday.
Share via
FacebookTwitter
https://www.pitchero.com/clubs
Recent news