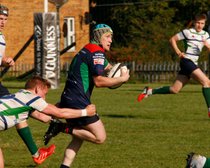 As far back as the 25th January when Clogher travelled to Portadown little did they realise that it would be eight months before they would play another competitive league fixture.

As far back as the 25th January when Clogher travelled to Portadown little did they realise that it would be eight months before they would play another competitive league fixture.
Travelling up the M1 on Saturday morning little did they realise how competitive that fixture would be.
Two late changes saw Flynn in to partner Mills in the centre and after a year down under Trotter was back in the scrum half spot.
Grosvenor started at a brisk pace their big hard running backline causing early problems.
Indeed they thought they had an early try but one of their players had stepped into touch to the relief of the Valley contingent.
Gradually the visitors weathered the initial onslaught and started to put some phases together. A good ball in behind by Armstrong set up a promising field position.
Wilson was inches from a score and minutes later as Grosvenor tried to break out the effervescent Dunwoody downed a ball carrier who then conceded a penalty.
Armstrong obliged and the visitors were 3 points up.
The remainder of the half was frenetic. It was punch and counter punch. The Valley had an edge in the set pieces but the Grosvenor backline were hard to contain. Flynn , Mills and Maxwell made important tackles and Dunwoody was never far from the action.
Alas on the forty minute mark Grosvenor did strike with a converted try to leave the half time score 7 3.
The Valley opened the second period on the front foot. Grosvenor were pinned back in their own 22’ metre area. Five metre scrum, penalty to the visitors, another 5 metre scrum, and penalty again as Grosvenor struggled to contain the visiting eight. A further scrum and on the third offence the official went under the posts to award a penalty try.
At 7 10 the travelling support thought their side would push on from here but that was not to be. Grosvenor would hold most of the aces as the game progressed. The Valley defence was magnificent . No 8 Wison was outstanding in defence as were his back row colleagues Fegan and Dunwoody.
As the pressure built the penalties count would rise. Fifteen minutes in Grosvenor levelled the score with a difficult penalty attempt.
Some good tactical kicking and positive chases saw play to and fro in the third quarter. Grosvenor had a further penalty sail wide but soon were to get another chance.
Flynn made a superb tackle but was trapped under a mesh of bodies and was rather harshly yellow carded for not rolling away. Penalty in front of posts. In creditably it to sailed wide.
Minutes later another yellow card this time it was Liggett who was off.
Down to thirteen men the floodgates could have opened but try as they may Grosvenor could not get the breakthrough.
The Valley showed great character and resilience in defence no more so than winger Boles who made two incredible try saving tackles as the visitors held the line.
Grosvenor had one last chance another penalty on the stroke of fulltime. Their kicker’s confidence had been shot and it to sailed wide to the relief of the Tyrone outfit.
This was a hard earned two points but deserved.
Next Saturday it’s away to Enniskillen for the normal 2.30 kick off.
Share via
FacebookTwitter
https://www.pitchero.com/clubs
Recent news