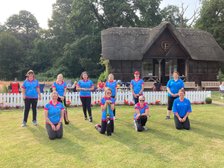 Clumber Storm hosted Welbeck, Blyth & Keyworth Ladies in the East Midlands Softball cricket league. The season has been cut short as a result of the ECB implementing their phased approach to safe play.

Welbeck batted first and got off to a good start with the openers scoring 24, partnerships of 18, 32 and 22 saw them to usful total, losing only two wickets with Lucy Taylor bolwing well.
The Storm changed their openers with Chantelle (16), on debut, and Tina(5) scoring 21. Lousie (24) and Nyah (4) scored 28, at the halfway stage Clumber were 249-4 and behind the rate. Third pair Maxine (19) and Anya (14) played weill to move the score to 281-5, losing only one wicket. The last pair, Lisa (36) and Katie (4) went in needing 30 to win, the loss of a wicket increased the target. The pair batted well to win by 5 runs with 3 balls to spare.

The second match paried two unbeaten sides in what promised to be a good game. The players didi not disappoint in anoth close finish.

Player of the Match - Wendy Eccles

It is great to see that all of the teams are reaching a similar standard and improving making for close and competitive games.

Next fixtures are 23rd August with the Storm travelling to Welbeck.