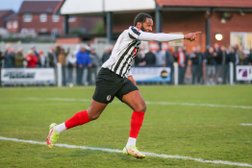 Coalville Town are one win away from securing promotion after beating Rushall Olympics 3-0 at the Mander Cruickshank Solicitors Stadium.

Goals from Eliot Putman and a double from Tyrell Waite sealed a stunning win for the Ravens.

It was the visitors who started on the front foot, pressuring the Coalville backline and almost taking the lead early on as Alex Moore’s shot just goes past the far post.

Coalville Town were the side to open the scoring after 10 minutes, the ball falling to the feet of Putman who curled a beautiful shot into the top corner.

Despite the early goal, the Pics were seeing more of the ball but were struggling to create any concrete chances. Danny Glover nearly found himself through on goal but goalkeeper Tiernan Brooks did well to gather.

The key moment of the game came in the 29th minute, with Jordaan Brown receiving a straight red card after pulling down Waite who was through on goal.

It didn’t take long for Coalville to double their lead soon after. Tom McGlinchey with a cross from the right to Waite who headed powerfully past Palmer.

The home side went close to extending their lead. McGlinchey and Billy Kee were both denied with brilliant saves from Thomas Palmer.

The second half started as much as the first. Coalville Town looking dangerous every time they go forward whilst the Pics looking to find a way back into the game.

Rushall Olympic continued to work hard and threaten the Coalville Town goal but it was clear this was an exercise in damage limitation.

Moore had a golden chance to half the deficit for the visitors but his header came of the bar.
The Ravens topped off a wonderful display when Tyrell Waite got his second of the game.
The striker drove with the ball before poking his strike into the far corner.

The action wasn’t finished. Tyler Lyttle’s high challenge on Kian Taylor earned the Rushall man the second red card of the game as the Pics were down to nine men.

Coalville Town will face Peterborough Sports on Monday in the final to decide which team will earn promotion to the Vanarama National League North.

Thanks to Farhaan Moti for the Match Report.

The Tollgate Brewery Man of the Match is Tyrell Waite.