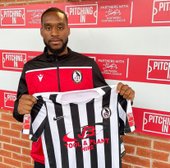 Herve Pepe Signs for the Ravens

Pepe signs for the upcoming season

Herve has signed for the Ravens after a number of impressive performances during the pre-season fixtures.

The 25 year old centre midfielder has returned from 5 years away from football due to injuries and lists Boston United, Kettering Town & Leicester City as his former clubs where he was very highly rated winning Leicester's Academy Player of the Year Award in the 2013/14 season.