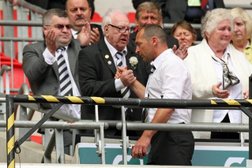 We are devastated to announce that long time Club Treasurer Jack Sarson has died aged 94.

Having been involved with Ravenstone and Coalville football for over 40 years Jack has played a key part in getting the club to where it is now working alongside Chairman Glyn Rennocks and vice Chairman Mick Jordan.

Everyone will remember Jack for his positive attitude and big smile whilst he supported the players week in week out.

Over the past few seasons he has struggled to attend games but the clubhouse bar was renamed ‘Jacks Bar’ in his honour and he shall always be with us.

Chairman Glyn Rennocks broke the news earlier and commented that he had lost a ‘club legend and great friend’ - thoughts echoed by everyone who has also left touching comments via twitter.