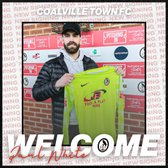 Keeper Added To The Ranks

Goalkeeper Paul White becomes our first addition of the summer.

White (27) is a 6ft4 stopper who brings a wealth of experience to the Coalville backline.

Originally from Cork City the Irishman moved over in 2013 and had spells in the professional game with the likes of Forest Green, Boreham Wood & Accrington Stanley.

He then joined Kettering Town in 2016 and went on to win the Southern league title with the Poppies by 14 points during the 2018/19 season.

A move to National League North side Hereford FC followed in 2020 but more recently he has had spells back in the Southern Central League with St Ives Town and latterly Peterborough Sports where he kept a clean sheet against Coalville in February during a league game.

He has signed with the Town on a one year deal with a further one year option also included.

Manager Adam Stevens commented 'It was very important to get an experienced keeper in. Paul's won this league with Kettering and has always impressed me whenever we’ve faced him’.

Great to have you onboard, Paul!