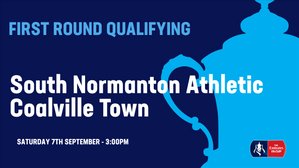 Coalville make the trip to South Normanton Athletic for FA Cup Action when they enter the competition at the First Round Qualifying stage.

South Normaton Athletic have reached this stage by beating Selston FC 5-0 in the Extra Preliminary Round & then Long Eaton United 1-0 in the Preliminary Round on Tuesday evening after a replay was needed with the 2 sides previously drawing 1-1 in the original fixture on the 24th August. The winner on Tuesday evening for the 'Shiners' came from former Raven Eric Graves.

South Normaton are at Step 5 in the Non League Pyramid & are in the Midland Football League where they have made an impressive start to the season sitting in second place having won 4 of their opening 5 games with 1 defeat scoring 12 goals in the process.

Coalville will be without Kairo Mitchell who is on international duty with Grenada. On Thursday evening Grenada won 2-1 against St Kitts & Nevis and with Kairo opening the scoring for Grenada. Stuart Pierpoint is available for selection again after serving has 1 match suspension against St Ives Town.

The venue for the game is: