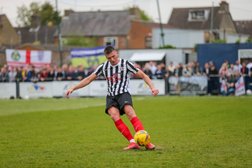 Defender Eliot Putman has put pen to paper on a two year contract with the club.

Eliot joined from local rivals Barwell FC on non-contract terms last September and became an ever present in the side that went all the way to the play off final.

He also recently won goal of the season for his excellent half volley against Stourbridge during his debut.

Manager Adam Stevens & Chairman Glyn Rennocks were delighted that 'Putty' has committed and we are all looking forward to seeing him in black and white again next season.