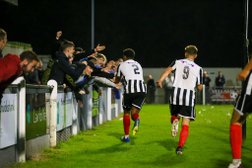 The Ravens saw out a 2-0 win over the worlds oldest football club, Sheffield FC on Tuesday night in the First Qualifying Round of the Emirates FA Cup in front of a crowd of 369 spectators at the Mander Cruikshank Solicitors Stadium. The game saw some action at both ends of the pitch but eventually it was Coalville who were the more clinical team and finished their chances.

The game started off relatively slowly with brief spells for both teams who were trying to settle into the game. Not long into the first half, around the 7th minute mark, a Coalville long ball was chased down the right flank and was rolled into the opposition area where it was met by the striker who took a shot, ricocheting off the leg of the Sheffield defender and turning the ball into the bottom left corner of the goal.
After the opening goal, the game seemed to fall into the hands of the Ravens who seemed to have total control of the game, a good passing play resulted in a shot from distance by Joe Doyle-Charles but the Sheffield goalkeeper made the save comfortably.

Coalville’s dominance of the game became less intense as both teams settled into the flow of things, the game became a lot more scrappy towards the middle of the first half with neither team creating all too many chances and despite Sheffield FC coming back into the game a bit, Coalville still remained sharp and on top in midfield.

Another good chance came to Tim Berridge who had the ball in the Sheffield penalty area and after being unluckily unable to get the ball from underneath his feet, he readjusted himself and managed to pull off a very good shot which cannoned back off the upright around the half hour mark of the game.

The game again returned to being scrappy in the midfield with a couple of non-threatening corners from Sheffield FC and the first half eventually drew to a close with Adam Stevens Ravens 1-0 up at the interval.
The second half started with Sheffield FC briefly seeming the better side after putting good pressure on the Coalville defence however a fast counter attack let the Ravens take advantage of the slow Sheffield defenders and a cross was whipped into the box but Billy Kee was unable to get over the ball and headed the chance over the goal.

Soon after this, Sheffield were awarded a free kick down the left wing after a foul from Jake Eggleton resulted in conceding a free kick and the defender receiving a yellow card. The free kick was delivered into the Coalville area but Saul Deeney dealt with the danger, comfortable as ever.

Sheffield began to find themselves being heavily exploited in the full back positions as lots of crosses kept coming in from both sides by the Ravens who looked almost certain to score again. Eventually after relentless bombardment from Coalville attackers, the ball was crossed into the box and hit the Sheffield defender, almost resulting in the second own goal of the game if it wasn’t for the goalkeeper who kept the ball out. However, the rebound fell to Kalern Thomas who slid the ball across the ground and into the back of the net. Thomas ran to the fans in delight and celebrated heavily after getting his much deserved goal.

After the second goal the game calmed down a bit and both teams had the odd chance at each end of the pitch but it was too late for Sheffield FC to try and recover a result and the game finished 2-0 to the Ravens who now progress to the next round of the Emirates FA Cup.