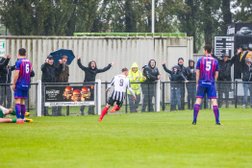 The Mander Cruickshank Solicitors Stadium saw Coalville Town eventually succumb to a 2-1 loss at the hands of Alfreton Town in the Second Qualifying Round of the FA Cup. A season high 440 spectators watched the match.

Rain was still heavily falling as the game kicked off on a very slippery pitch. From the off, Coalville didn’t seem to switch on as Alfreton gained the lead after only 2 minutes with a curled shot into the bottom corner of the goal by Dominic Smith.

After the early goal, the Ravens kicked into action a got more into the game and had some good attacking spells. Around the 15-minute mark, Rhys Hoenes chased a long ball down the left wing before dribbling into the box and being clearly pushed down Nathan Fox, but the referee waved away the stonewall penalty.

As a result of being fouled in the penalty incident earlier, Rhys Hoenes had to come off the pitch with a shoulder injury and was replaced by Tom McGlinchey.

Not long after this substitution, the Ravens found themselves 2-0 down after an attacking ball was flicked on by an Alfreton player and Jake Day won the ball and put a good shot into Saul Deeney’s far corner.

The Ravens were finally awarded a penalty in the second half after Billy Kee was dragged down in the box. Billy Kee took his penalty, but George Willis in the Alfreton goal did well to guess the right way and get down to his corner to deny Coalville the goal.

Not even a minute after Kee’s penalty miss, Coalville had their goal after Berridge received the ball from out wide and turned the defender before putting the ball past the keeper. The Ravens felt full of hope and were quick to restart after their goal but after spells of relentless pressure down both wings, Coalville just couldn’t seem to score.

Coalville had many, many corners and free kicks on the edge of the area but Alfreton defended brilliantly to make sure that the Ravens could not find the equaliser.

The game finished after a final corner for Coalville which saw goalkeeper Saul Deeney to try and make the difference, to no avail.

2-1 to Alfreton was the final score and in the end it was the better team who lost as almost everyone in the ground would agree that Coalville deserved something from the game for their second half performance.

Coalville’s next game sees them face Hednesford Town away from home in the league and the Ravens will be hoping to build on their strong start to the campaign.