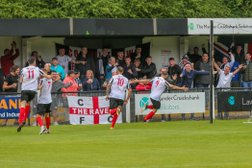 Coalville ended 2017 in disappointment as they fell to a second consecutive 3-0 defeat at the Mander Cruickshank Stadium.

After initially matching the table topping visitors in the early exchanges, Altrincham slowly took control of proceedings, sealing their third consecutive 3-0 victory thanks to goals from James Poole, Jordan Hulme and Sean Miller.

Two changes were made by Tommy Brookbanks following Boxing Day’s 3-0 home defeat to Barwell, Cleveland Taylor and Blair Anderson both returned in place of Kyle Bryant and Kyle Dixon.

The visitors – unbeaten in the league since early September – initially found themselves on the back foot as Coalville made a bright start, with Daniel Creaney having a goal ruled out for offside after converting Dean Freeman’s flick following a corner.

Joshua Hancock then had a half chance for the visitors, drilling wide from 20-yards after finding an opening.

The Ravens then returned with two big chances of their own. In the 10th minute, Nathan Watson picked up the ball in space just outside the area before sliding Tom McGlinchey through with a reverse pass, unfortunately the Ravens winger could only hit the side netting from close range.

Creaney also spurned a good opportunity minutes later, lifting the ball over the goalkeeper and bar after McGlinchey blocked a clearance, forcing the ball into Creaney’s path.

McGlinchey and Watson combined again in 21st minute, playing a slick one two which saw McGlinchey cut the ball back to Alex Howes on the edge of the area, who directed his shot straight down the throat of Anthony Thompson.

The hosts were then forced into a change midway through the first half after Freeman went down injured, Bryant was brought on as his replacement.

As the game wore on, the Robins began to crank up the pressure. Jake Moult volleyed over and Poole’s driven effort hit the side netting as they looked for a breakthrough.

And it came right on the brink of half time courtesy of a Poole free-kick. Lee Torr brought down Simon Richman on the edge of the box after Taylor had initially given the ball away. The 20-yard set-piece was then dispatched accurately by Poole, who side footed the ball into the bottom left corner.

The away side then jumped into the driving seat in the second half, with the majority of play being one-way traffic. Matthew Coton was forced into an early second half save after John Johnson scurried down the by-line before attempting a shot from a tight angle.

Coalville’s best opportunity of the half came on the hour mark, with Creaney inches away from finding an unlikely leveller. Anderson flicked the ball over the head of Shaun Densmore before finding Creaney in the centre, who flashed a powerful effort just over from 12 yards out.

Seemingly growing more in confidence as the game progressed, Altrincham created further opportunities, Johnson was again denied at the near post by Coton before the visitors eventually found a second.

Hulme netted his 16th league goal of the season, firing into the bottom left after receiving a pass from Richman inside the box.

Coton then denied the Robins an instant third, diving to prevent Richman from grabbing one of his own from near point blank range.

Danny Jenno also did well to maintain a glimmer of hope, making a last ditch clearance to deny substitute Thomas Peers after the attacker rounded Coton.

However, Altrincham cemented their superiority with a third minutes later. Sean Miller latched onto a Shaun Densmore cross-field ball before nodding past an indecisive Coton.

Coalville will be hoping a new year brings contrasting fortunes to those which the team ended on, starting with New Year’s Day’s trip to Mickleover Sports.