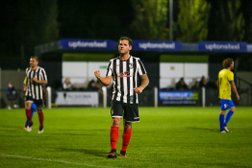 Tuesday night saw the Mander Cruikshank Solicitors Stadium see its 3rd game in 7 days as the Ravens hosted Redditch United in the league.

The game came after a triumphant 4-1 victory on Saturday against Leiston FC, and Coalville were aiming to build on that victory. The match ended as a draw however, after goals from Tiago Nassunculo for Redditch and Billy Kee for Coalville saw the game finish even.
Very sluggish and sloppy starts from both teams meant that there was little action to report at the start of the first half, with neither team being able to cause problems for the others defence.

As the half progressed, Redditch began to take some long shots at Sean Bowles, but they all either missed or were dealt with well by the defence and goalkeeper.

The first real chances for Coalville came in the form of two almost identical shots from Luke Shaw down the left wing, who cut in onto his right foot and unleashed two shots that both curled inches wide from the top right corner of the goal.
Coalville gathered momentum and started attacking a lot more down the wings through Rhys Hoenes and Luke Shaw. Not long before half time, the Ravens had another chance in the form of a Tim Berridge shot from about 10 yards which skimmed the outside netting of the goal.
These brief chances concluded the half and the teams went into the break at 0-0.

The second half started off in the same manner as the first with play being slow. Eventually a chance was created for Coalville as a free kick was awarded down the left hand side of the pitch and was whipped dangerously towards the back post but there was just a little bit too much power on it as it just went over the crossbar.

Shortly after this was the Redditch United goal. Tiago Nassunculo received the ball to feet and makes his way into the Ravens penalty area before putting a powerful shot past Bowles and into the bottom left corner of the goal to make the game 1-0 to the visitors.

Redditch United maintained their lead for only a matter of minutes as Kalern Thomas burst into the penalty area for Coalville and was brought down by the defender, resulting in a penalty. Billy Kee stepped up to take the penalty and sent the Redditch goalkeeper the wrong way by placing the ball well into the bottom left corner. The game was tied.

Back down at the other end of the pitch, Redditch United had a free kick from roughly 20 yards out, which Kyle Copp took for the visitors. The free kick flew over the wall and struck the far post, very narrowly missing out on going into the back of the net. The ball bounced back into play but the Coalville defenders reacted fastest and managed to clear any resulting danger.

The game grew in intensity and this resulted in a small scrap between Billy Kee and a Redditch defender after it seemed that Kee had held out his leg against the opposition man. The Redditch player kicked off before the referee came over and deescalated the situation.
As a result of this small scuffle, it seemed that both teams had a sudden boost of energy and intensity and the game became very scrappy and physical however neither team could force another goal.

Towards the end of the game, the Redditch United goalkeeper was forced off the pitch due to a nasty looking hand injury, leaving him unable to continue. The new goalkeeper came into play and was almost instantly met by an incredible cross from deep by Kalern Thomas to Luke Shaw, but the attacker just couldn’t get quite enough on the ball to direct it goal wards.

Seconds before the final whistle, a long ball was played to the pacey Redditch attacker who was one on one with Sean Bowles, but out of nowhere Kalern Thomas made a last ditch sliding tackle to win the ball and deny the visitors from certainly taking home all three points. Overall, the game was very even and a draw was a fair result in a good contest between two good sides.

The Ravens Man of The Match award was won by Jake Eggleton and the Ravens substitutes were Tom McGlinchley replacing Rhys Hoenes.