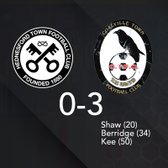 Hednesford started the brighter of the two sides in the early stages until the Ravens took the lead against the run of play, Luke Shaw cut in from the left flank into the box on his right foot and fired a low effort past Jose Veiga just inside the far post.

Coalville then started to take ascendancy after the goal and came close to adding a second moments later, Billy Kee laid off Tom McGlinchey on the right who danced past Carter Lycett into the box but fired his shot over the bar.

From the next attack Coalville did double their lead, Tom McGlinchey found Tim Berridge 25 yards out who fired low and hard into the bottom left hand corner.

Coalville extended their lead five minutes into the second half, Luke Shaw advanced with the ball before hitting a left footed shot which Jose Veiga could only palm away straight to the arriving Billy Kee who tapped home to put the final result beyond doubt.

The Ravens were denied a fourth with the last kick of the game, Connor Smith dispossesed Ben Bailey on the half way line, Alex Dean ran onto the loose ball and advanced towards goal, his first effort was saved by Jose Veiga and then from the rebound Dean hit a left footed effort against the crossbar.

Tollgate Brewery Man of the Match was Tom McGlinchey.