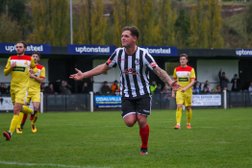 The Ravens ran riot against Banbury United on Saturday afternoon

Adam Stevens named an unchanged side from last Saturday's win at Rushall Olympic. The Ravens made a slow start to the game and found themselves a goal down in the 6th minute, the dangerous Henry Landers cut in from the right flank and fired a low strike past Deeney. The Puritans winger had a couple of other chances and was looking lively in the early stages of the game.

After the early Banbury pressure, Coalville were growing increasingly into the game and the hosts drew level in the 28th minute with Jake Eggleton scoring from close range following a knockdown by Chris Robertson.

Coalville took the lead two minutes later through Tim Berridge, his strike partner Billy Kee picked out a lovely through ball to Berridge who rounded the keeper and finished from a tight angle. Kalern Thomas then whipped a great ball in from the right flank to Berridge but the striker arrived just too late to get a touch onto the ball.

Tim Berridge was denied what looked like a stonewall penalty when Jack Harding brought down the forward but the referee waved away the appeals. Henry Landers then came inches away from his and Banbury's second of the game, the winger cut in from the right flank and fired against the post.

Luke Shaw got the third Coalville goal in the 68th minute after he followed up from a shot from distance from Billy Kee which Harding could only parry and Shaw was there to run onto the rebound and slot home.

Things went from bad to worse for Banbury, Jack Harding was trying to shield the ball out of play for a goal kick but Kalern Thomas had other ideas who nicked the ball off the keeper and advanced into the box, Harding then bundled Thomas down giving the referee no option to point to the spot and show Harding a red card. With no keeper on the bench for Banbury, striker Ricky Johnson put on the gloves. Kee stepped up to send Johnson the wrong way and put the game beyond doubt.

Five minutes later Coalville were awarded a second penalty, Kee rounded Johnson who then brought him down, Kee again stepped up and again sent Johnson the wrong way.

Connor Smith & Rhys Hoenes were then introduced into the game and Smith made an instant impact, Kee dropped into a deeper position and played a superb through ball to Smith and finished brilliantly past Johnson to make it 6.

Tollgate Brewery Man of the Match is Billy Kee.

Next up for the Ravens is another home fixture against A.F.C. Rushden & Diamonds on Saturday 24th October.