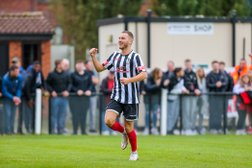 Coalville Town go top of the league after a totally dominant display against AFC Rushden and Diamonds at the Mander Cruickshank Solicitors Stadium took them to 17 points for the campaign.

The game started of very even with little chances being created and most the ball being held up in between the midfields of both teams. The first real chance for the Ravens came when Billy Kee held up the ball brilliantly on the edge of the box and managed to sneak through a ball to Tim Berridge who just couldn’t quite get his snap shot on target and the ball flew just over the opposition net.

About 10 minutes later, Coalville broke the deadlock via Tom McGlinchey. Luke Shaw received the ball out wide and played in a low ball into the box to McGlinchey whose shot was pushed into the top right corner by ex Raven Richard Walton in the Rushden goal.

Shortly after this, a foul was committed by Rushden and Diamonds by the edge of their box and after consultation with his linesmen, the referee decided it was a free kick and not a penalty like many people in the crowd and on the pitch had initially thought. The free kick was taken by Kian Taylor who attempteted a smart pass along the ground into the box but it was well cleared by the alert Rushden and Diamonds defender.

Later on in the first half, Billy Kee was pushed over in the box, however the referee did not award a penalty and this caused a physical disagreement between Kee and Ross Oulton, Kee & Oulton clashed before Oulton dropped to the ground. Kee was booked.

A couple of good opportunities by Luke Shaw failed to find the back of the net just before the end of the first half.

The score remained 1-0 to the Ravens at the interval and Coalville were looking dominant and comfortable with their lead.

The second goal of the game came from a Kian Taylor cross along the ground that reached the feet of Tim Berridge who directed the ball past the goalkeeper and into the back of the net to double the Ravens lead.

Tim Berridge scored again not long after his first; he received the ball just outside the box, carried it forward and hit a powerful shot into the left side of the goal, leaving the keeper hopeless. Coalville led 3-0.

Luke Shaw finally saw his hard work during the game pay off as he received the ball out wide, cut inside and hit an incredible curling shot past the goalkeeper into the top right corner, making the game 4-0 and almost guaranteeing Coalville the 3 points.

Rushden and Diamonds did manage to pull a goal back after a good free kick was delivered towards the back post and was met by the head of Ryan Hughes who did very well to put the header into the top corner of Deeney’s goal.

The action died down after this as both teams accepted the result and the game came to a slow close. The game finished 4-1.

Coalville’s win was watched by a sold out crowd of 500 at the Mander Cruickshank Solicitors Stadium, with a fair few Rushden and Diamonds fans making the journey.

The Tollgate Brewery Man of the Match is Steve Towers.