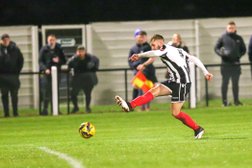 An attendance of 362 people watched Coalville Town take on Matlock Town in the FA Trophy in what is thought to be the Ravens last game until December the 2nd at the earliest.

Early on in the first half, neither side really had much fight in their game and event started off slowly, that was until the first real chance of the game came to Kalern Thomas who received the ball out wide and played a low ball into the box which met the feet of Tim Berridge who stumbled with the ball at his feet, but quickly recovered and tucked the ball past the Matlock goalkeeper.

The Coalville pressure continued after gaining their goal advantage, and the Ravens played a short corner, and the ball fell to Kalern Thomas who took a shot from range which flew wide.

Soon after this, Billy Kee picked out Tim Berridge in behind the Matlock defence, Berridge snuck the ball past the oncoming defender and managed to squeeze a shot into the bottom left corner to double the Ravens lead.

Coalville had the 2-goal lead, despite not necessarily being the better looking of the two teams.

A Matlock corner fell to an attacker just outside the Ravens box, who hit the flying ball on the volley from about 20 yards, slicing the ball awfully and resulting in a goal kick for keeper Saul Deeney.

A spell of possession ensued by Matlock, who forced Coalville into conceding a corner. The corner was floated into the box but Saul Deeney got to the ball first and caught it out the air with no problems.

The two teams went in at the break with the Ravens on top, holding the score at 2-0.

Seconds into the second half, Matlock attacked the Coalville penalty area and after a kerfuffle, Reece Kendall bundled the ball home to reduce the deficit.

Further into the second half, Matlock were awarded a free kick down the left wing after a handball by a Coalville player. The free kick was brilliantly whipped in, directly onto the head of Spencer Harris, who directed the ball into Saul Deeney’s far corner to level the game.

As the game became more intense, both teams were having more and more attacking opportunities, with the closest chance coming from a long range strike from Tim Berridge that rattled the crossbar.

Matlock eventually completed their comeback as they managed to lead the game 3-2 after a swift counter attack, Callum Chippendale scored with a free header leaving Saul Deeney rooted to the spot.

After looking unlikely to score for most of the second half, the Ravens made the game 3-3 after a fast counter attack straight after kick off. Kalern Thomas ran with the ball and passed it to Tim Berridge, who quickly turned and found Luke Shaw at the back post who smashed the ball into the net in front of the Ravens fans.

The game finished 3-3 and went straight to penalties, but this only resulted in heartbreak for Coalville as they lost the shootout 4-2 after Joe Doyle-Charles and Kalern Thomas had their penalties well saved. Matlock Town now face Coleshill Town away from home in the next round, whenever that may be.

The Tollgate Brewery Man of the Match is Tim Berridge.