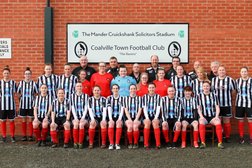 Coalville triumph in one sided game

After only playing each other last weekend and undeservedly losing 2-3 after leading 2-0 with only 20 minutes of the game left Coalville came out a side determined not suffer a repeat in the reverse fixture.
It took only thirteen minutes for Coalville to make the break though, a neat ball over the top from Leeson to Burton, who’d nestled herself smartly between the two sleeping Syston defenders, raced clear and connected with the ball, as well as the on-rushing goalkeeper, to score. Unfortunately this would prove to be Burton’s final action of the match, as she came off through injury as a result of the collision.
Coalville continued to create chances and were unfortunate not to finish any, foiled by poor finishing and the Syston keeper who threw herself at every 50-50 ball coming off worse each time which eventually led to her being substituted in the second half. But in the thirty-fifth minute Davies, a constant threat since replacing Burton, managed to beat the Syston defence and loop the ball up over the keeper to make it two to Coalville.
Less than 10 minutes later Coalville made it three for the half. A quick counter attack from Syston's only corner of the first half, lead to the ball being cleared to Davies, who provided a ball over the top for Leeson to again leave her markers standing to be presented with a one-on-one with the keeper. Leeson came out on top to finish, sending her side in the happier of the two teams into the half-time break.

The second half showed a constant Coalville midfield dominance and coupled with the threat of Davies and Tucknutt allowing for more chances to be created. A number of closes efforts followed which included a forward playing Newham receiving and turning with the ball to play through to Leeson, who again came close to finishing. Coalville kept knocking on the Syston door, emphasised by the forward runs of left-back Coote.
In the seventy-fifth minute the ball found its way into the Syston box, with the keeper going to ground to collect, but fumbling her catch, allowing the on-hand Newham to dispatch. Making it Coalville 4 goals to the good.
It could of easily been five as in the dying minutes Coalville had three corners which peppered the Syston goal but to no avail.